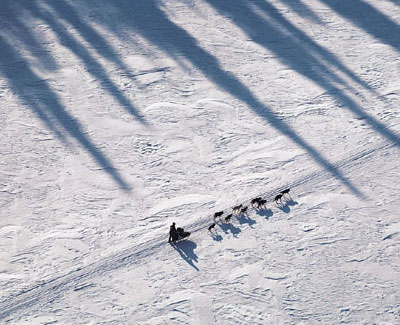 Long before the first Iditarod Trail Sled Dog Race was held in 1973, dog sleds carried indigenous people and explorers along snowy and icy Alaska paths. The Iditarod trail is the same route used during the gold rush of the early 1900s to reach mining towns, including Iditarod, Alaska. And the same trail was later used to transport diphtheria serum in 1925, when the diphtheria epidemic had spread to even the remote outreaches of Nome, Alaska. Sled dogs and mushers made it possible to cross the nearly 700-mile treacherous path from Nenana to Nome to stop the outbreak. A statute honoring one of the lead dogs, Balto, was erected in New York City's Central Park in 1926.

Fast-forward almost a half-decade to when Joe Redington Sr. and Dorothy Page, bemoaning the replacement of dog sleds with snowmobiles, decided to form a race to honor the Alaskan tradition. In the 1960s, they organized a 50-mile race, but it was the 1973 race from Anchorage to Nome that launched the now world famous Iditarod competition. They chose the Iditarod trail to commemorate the 1925 diphtheria run. That first race in 1973 commenced with 34 teams, 22 of which made it to the finish line.

Over the years, the race's popularity has grown and changes have been made to the competition. Complaints from animal rights groups caused some corporations to drop their sponsorship of the race. As a result, the race committee put in place more safeguards for the dogs. But as more competitors sought to take home the first-place prize, the competition grew fierce, with race entrants going all out to win. The record time for winning the race was lowered to less than nine days in 2002, versus the 20 days it took in the race's first two years.

The race has followed almost the same route, with the exception of the addition of a southern route that is used every other year. The two routes are the same except for a 300-plus mile portion in the middle of the race.

Many mushers hold jobs outside of sled dog races. With corporate sponsorships, race winnings and other sources of income, mushers manage to cover the costs of this expensive sport. Expenses can easily rise to $20,000 for each musher to prepare for and compete in the Iditarod -- including gear, transportation and caring for dogs.

In the next section, we'll learn about the race's competitors, both canine and human, as well as the gear they use.­­

How to Enter the Race

Not just anyone can jump into the race. Iditarod entrants must be at least 18 years old and have completed certain qualifying races: a previous Iditarod race, a previous Yukon Quest International Sled Dog Race or two approved races with an accumulated total of at least 500 miles in which the entrant finished in the top 75 percent of the field or in a time of no more than twice the time of the race winner. It costs $3,000 per musher to enter the Iditarod.