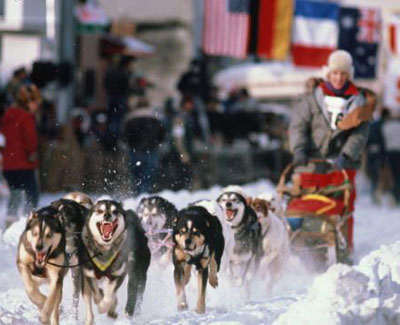 Iditarod Image Gallery An Iditarod competitor at the beginning of the race. See more pictures of the Iditarod.
Kevin Horan/Getty Images

It's offi­cially known as the Iditarod Trail Sled Dog ­Race, but it's often referred to as the L­ast Great Race on Earth, or simply the Iditarod. It's a competition that pits one dog driver, called a musher, and a team of dogs not only against other racers but against the (often cruel) forces of ­Mother Nature.

Named for a town in Alaska, the race ceremonially sets off from downtown Anchorage, Alaska, on the first Saturday in March. The next day, the official start of the race occurs farther north. Over the course of the next nine to 19 days, competitors cover roughly 1,131 miles (1,821 kilometers) in a race to reach the finish line in Nome, Alaska.

­The Iditarod Trail Sled Dog Race has been held every year since its inception in 1973. The number of participants varies each year (110 mushers, both men and women, entered to compete in the 2008 race). In 2007, 58 mushers finished the race, 23 dropped out and one was disqualified. The current record is held by Martin Buser, who completed the race in 8 days, 22 hours, 46 minutes and 2 seconds in 2002.

The terrain that racers must pass through is tough for even the most experienced musher, and the weather conditions can be brutal. Temperatures range from 50 above zero to 60 below zero, and blinding snow and whipping wind aren't uncommon.

In this article, we'll look at how the Iditarod got its start, what it takes to compete in the race, and some of the hazards encountered on the trail.

There are actually two different Iditarod courses. In even years, the race follows a northern route, while in odd years, it covers a southern route.

It is said that the northern trail is the easier of the two routes, but both are precarious and include uninha­bited wilderness, hilly terrain, swamps, frozen rivers, thick forests and barren land exposed to the elements, like lashing rain or chilling winds.

There are 26 checkpoints (where the mushers stop) along the northern route, and 27 along the southern route. The checkpoints are in tiny towns and villages, with populations ranging from zero to 30,000. For those places with no or few residents, a tent or cabin serves as the checkpoint.