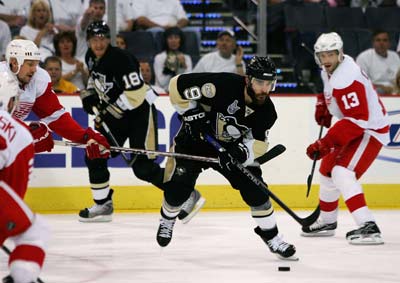 From the frozen lakes and rivers of Canadian winters to nationally televised games played at high-tech arenas before 20,000 fans, ice hockey has come a long way. Though the rules and equipment have changed through the sport's 128-year history, the spirit of the game remains the same. Hockey has always been a sport of speed and grace mixed with grit and a certain amount of violence. That combination has proven irresistible to fans for over a century. A crowd of 5,000 reportedly watched the first ever Stanley Cup competition in 1893. During the 2002-2003 season, attendance at national Hockey League games topped 20 million.

The history of hockey holds more than just changing rules and regulations. A host of colorful characters, bizarre traditions, and strange events mark hockey's timeline. Few sports can top an octopus on the ice, a team traveling by dog sled, or a championship trophy getting dropkicked into a canal.

In this article, we'll learn about the storied history of hockey and the rules that govern the modern game. We'll also take a look at the equipment used to protect players from a puck traveling at over 100 mph (161 kph).

The longest game in NHL history was between the Montreal Maroons and the Detroit Red Wings in 1936. Beyond the regular 60 minutes of play, they played 116 minutes, 30 seconds of overtime before Detroit broke the scoreless tie to end it. The overtime period plus the 60 minutes of regular hockey time is 176 minutes, 30 seconds -- that's a really long game! Almost three complete games of hockey were played that night.

The longest modern era (post-World War II) game was in the 2000 playoffs, when the Philadelphia Flyers needed 92 minutes of overtime to beat the Pittsburgh Penguins. It was the third longest game of all time.