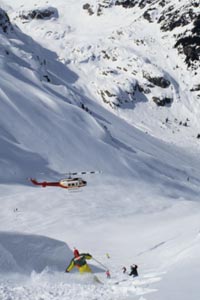 Some of us are satisfied skiing at large resorts or local runs, the more daring of us on on black diamond trails. The rest of us are generally happy to enjoy the skiing experience from a perch near the log fireplace in the lodge. But some brave ski souls just can't scratch the adventure itch with the offerings provided. Instead, they crave uncharted territories to "drop in" on.

Hans Gmoser knew that feeling. In 1955, Gmoser began flying airplanes full of skiers to remote Canadian glaciers, allowing them to ski in the summertime. Soon, more guides were airlifting skiers to hard-to-reach spots all around the world. If you could afford it, the destination was a skier's paradise: unskied terrain, untouched powder, and a course that reveals itself with each new drop and turn.

Gmoser's operation gave skiers access to the ridges and runs of the Canadian Rockies, and the locale still boasts the vast majority of heli ski guides and operators worldwide.

Around the mid-1950s, airborne ski guides made the switch from airplanes to helicopters. While airplanes were becoming easier to land on short runways, those flat runways were still a requirement. Also, while planes could carry more people, helicopters could get them atop the narrow, sky-kissed ridges that skiers craved. Helicopters could also easily land beside wooded areas where skiers liked to explore. Finally, when it came to landing in a valley or gorge, helicopters held a distinct advantage.

By the 1960s, Gmoser himself had switched to helicopters, and by the mid-1970s, he was building "heli-lodges" that could accommodate 44 people. It's not an arbitrary number -- Gmoser's helicopters could carry 11 people and make four trips a day.

Heli skiing has continued to grow in popularity, with new heli ski opportunities continuing to crop up around the world to meet the demand of the approximately 20,000 skiers each year who choose to make their ascents via helicopter.

The sport offers at least one benefit to guides and tour operators: While certain conditions and accessibility needs must be fulfilled to build a ski resort, heli skiers can be dropped in on nearly unlimited mountain ridges. This doesn't come cheap, however: Weekend trips can cost as much as $5,000, while full-week trips can run as much as $10,000.

Next we'll learn the basics about heli skiing skills. 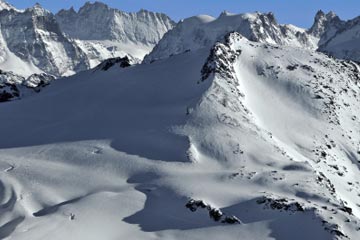 Heli skiing is, by nature, difficult skiing, so if you're considering a heli ski experience, you should be at least an intermediate skier (you won't find a bunny slope at these types of elevations) in good physical condition. You should be confident in your abilities, have lots of experience with deep powder and be familiar with skiing difficult runs in a wide variety of conditions. You need to be able to make controlled parallel turns on steep terrain, as well as be extremely proficient at ski skills such as kick-turning, traversing, side-slipping and snow-plowing.

A heli ski trip requires fitness and endurance. Go with a group of skiers with similar abilities and fitness levels. If you go with less experienced skiers, you may feel held back by their speed and ability. The overall speed and adventure of the trip will be determined by the ability and endurance of the worst skier in the group.

Because of the deep powder, you'll use wider, shorter skis that any heli ski guide will be able to outfit you with (for a charge comparable to regular ski rental fees). Of course, you can snowboard if that's more your thing -- and the same physical and skill requirements still apply. Skiers and snowboarders are usually mixed into the same group.

By being honest with the guides before the trip, you'll give them the opportunity to tailor the perfect trip for you. Not all heli ski trips are what mere mortals would consider a suicide mission -- there's lots of pristine, virgin powder in this world, and not all of it exists on a near-vertical plane. If your skill level could put other skiers in danger or hold them back, you can still have the ultimate cross-country skiing experience (just on a less-extreme scale).

Unless you're starring in a Hollywood action movie or you're sponsored by a ski-gear company that's producing an extreme video shoot, you won't be jumping out of a helicopter that hovers above a rocky slope. Pilots take great caution and care in selecting safe landing sites, and they'll land and let you off directly on the snow at the top of the run. 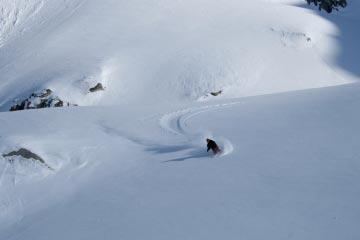 We hope this skier remembered to bring a transponder.
©iStockphoto.com/CynthiaShepherd

While not quite risk-free, heli skiing actually has some safety advantages over alpine skiing or resort ski trips. Many skiing accidents occur because of crowded conditions on slopes -- that's not a problem with heli skiing. Also, beginner skiers are more likely to get hurt due to inexperience, but it's the more advanced skiers who are the likeliest to heli ski. Heli skiers also have a guide nearby, not to mention rather prompt access to an emergency airlift should one be needed.

Heli ski operations and the guides they employ take safety very seriously. In British Columbia, only 54 people have died from the beginning of heli-skiing in the early 1960s to 2000 [source: Fry].

Pilots hired by heli ski operators should have loads of experience and flight hours and familiarity with the terrain. They must account for wind, quickly changing weather conditions, whiteout conditions and high altitude, all while making multiple takeoffs and landings each day with changing weight loads. You should feel free to ask about pilots' qualifications when you're making inquiries or reservations -- every reputable heli ski company will be happy to brag about its pilots.

Guides should be qualified and trained in first aid (many boast Wilderness First Responder, Outdoor Emergency Care and EMT training), have mountaineering certification, and have experience with the mountain range you're skiing.

Before your first trip, you'll be given a pre-flight helicopter safety lesson to orient you to your new mode of transportation such as the operation of the seat belts, how to exit in an emergency and the best way to avoid getting decapitated while boarding or disembarking.

All skiers should have personal transponders so they can be located in an avalanche. Other safety gear may include:

Different heli-ski operations have different rules or site-specific instructions about the amount and type of gear you can bring, so be sure to cover this with them before you leave for your trip.

Not enough adventure for you? We've got links to more HowStuffWorks articles on the next page.