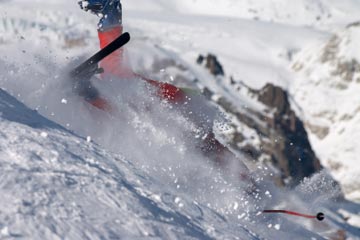 For the extreme skier, the dangers of treacherous slopes only increase the glory of conquering them. Though legends have been made of extreme skiers who have conquered mountains thought unskiable, cautionary tales spill forth from this dangerous activity as well, such as the 2008 death of extreme skier Billy Poole and the death of Shane McConkey in 2009 (both while being filmed for planned videos).

Extreme skiers are at increased risk of racking up all kinds of injuries, from lost teeth and broken bones to ruined knees and spines. In rugged backcountry and virgin snow, avalanches are a risk. When swept beneath a crashing wall of snow, extreme skiers can be crushed or suffocated if not quickly located and rescued.

In 2007, there were 38 ski-related deaths in the United States [source: Naito]. These deaths were spread over the spectrum of all ski and snowboard activities, but for the small percentage of skiers who embrace extreme skiing, the risks remain high. That's not to say extreme skiers aren't cautious and mindful about staying alive and healthy. It's just that any deviation from flawless execution of a stunt or trick can have disastrous results.

In McConkey's case, he was attempting a trick he had performed many times before: executing a double backflip, releasing his skis, and gliding away in a special wingsuit (think flying squirrel) and deploying a parachute during a 2,000-foot drop from a cliff. Once airborne, McConkey couldn't free himself from his skis, which is necessary to prevent your parachute from getting tangled up in them, and he was killed from the impact.

The ability to conquer death-defying runs and mind-blowing stunts -- especially on camera -- places professional extreme skiers in the peculiar position of being endorsed by ski-gear companies and other corporations to find more elaborate ways to risk one's life on skis. Many "in the biz" make a living starring in extreme videos featuring their daring feats. Even when executed safely, the jaw-dropping skiing featured in these movies can in turn prompt less experienced skiers to attempt dangerous feats that are far out of their skill set or ability.

Now that we know some of the dangers, we'll discuss on the next page some of the safety measures adopted by extreme skiers.