Browse the article How Curling Works 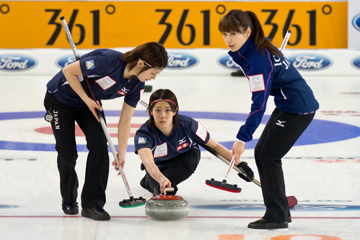 Curling is the punch line of Olympic sports, and it's not hard to see why: There are the less-then-athletic-looking players; the sport's uncanny resemblance to shuffleboard on ice; and of course, the sweeping — the vigorous, urgent, sometimes screaming sweeping. Maybe that's why world-class curlers have such a good sense of humor, in addition to remarkable balance, uncanny aim and a feather-light touch. Laugh if you will, but this 500-year-old sport is as strategic as chess, as addictive as golf and much, much harder than it looks.

Curling was born on the frozen lochs and marshes of 16th-century Scotland, where kilted clansmen would while away the long winter months by sliding river-smoothed "channel stones" across the ice [source: USA Curling]. The competitor who positioned his stone closest to a chosen target — empty jugs of Scotch whiskey worked well — was the winner. According to curling historians, it was customary for the winning team to buy the losers a drink, and only polite for the losers to return the favor. And so the rounds went until both winners and losers weren't sure who was who and nobody particularly cared [source: Costa].

Once a niche sport practiced by a few Scottish immigrants in Canada, curling has exploded in popularity since returning to the Olympic games in Nagano, Japan, in 1998. There are an estimated 16,000 curlers in the United States (up from 10,800 in 2002) and 653,000 curlers in Canada [sources: Canadian Curling Association, USA Curling. True, about two-thirds of U.S. curlers live in Wisconsin and Minnesota, where ice sports are a way of life, but there are also curling clubs in sunny California and deep in the sweltering heart of Texas [source: USA Curling].

To unravel the mysterious appeal of curling, let's start by explaining how the game is played and whether all that sweeping is just for show. 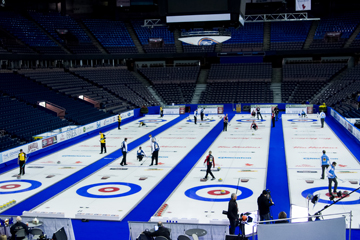 Teams in the Tim Hortons Brier in Edmonton, Alberta practice before the Canadian Men's Curling Championship. The spot inside the red circle is the tee. The house is anywhere inside the blue circle.
© Ron Palmer/Demotix/Corbis

Curling is a team sport with four members on each side. The object of the game is to get your team's stones closer to the target — a 1-foot (30-centimeter) diameter circle called the tee or button — than your opponent's stones. The button is located in the center of a 12-foot (4-meter) bull's-eye called the house. (You can see a diagram here). Each curler on both teams gets to shoot, or deliver, two stones for a total of 16 stones per end. An end is like an inning in baseball. At the completion of each end, points are tallied. You get one point for each of your team's stones that is closer to the button than your opponent's. There are 10 ends in each game of curling. The team with the most total points wins.

Easy, right? Hardly. Despite its simple appearance, curling is a game of complex strategy and strict team member roles. The captain of a curling team is called the skip. The skip usually throws last, because the final stones of each end are the most decisive when it comes to points. Before the skip throws, he or she stands behind the house and directs the other team members' throws, whether to attempt a draw — landing the stone inside the house — or a hit, knocking an opponent's stone out of play. The skip also yells out commands to the two sweepers, helping to influence the curl or spin of the stone and its speed.

Sweeping is the least understood and objectively strangest aspect of curling. The object of sweeping the ice in front of a moving stone is to decrease friction, encouraging the stone to curl less and travel farther. The surface of a curling sheet (aka the ice) is stippled with pebbles, tiny droplets of frozen water that allow the stone to coast over the ice, but there is still a significant amount of friction. Over the centuries, curlers have found that vigorous sweeping warms the ice surface slightly — it doesn't melt the ice — and that reduces friction enough to allow a stone to travel an additional 6 to 15 feet (2 to 4.5 meters)[source: USA Curling].

The other members of the curling team are named for their position in the throwing order. Each player throws two stones. The lead throws first, hoping to land a stone close to the button, then positions the second stone as a guard to protect it. Then the second throws, followed by the third (or vice-skip), always alternating with players from the other team. Each team's skip delivers last, with the final stone known as the hammer.

While the lead is throwing, the second and vice would be sweeping the ice (following directions from the skip). Then, the other team plays. Next, action reverts back to the first team, this time with the second throwing and the lead and vice sweeping [source: City of Windsor].

Confused yet? That's just the tip of the iceberg. More curling rules to come, plus a look at the sport's unusual equipment.

The official rulebook of the World Curling Federation is 59 pages long and covers every imaginable infraction, including a stone crumbling to pieces in the middle of a game. (Solution: "If a stone is broken in play, the teams use the 'Spirit of Curling' to decide where the stone(s) should be placed.") However, most of the rules have to do with lines, who can cross them, and when.

A curling sheet has two houses or scoring areas — one on each end — so play can happen in both directions. A thrower begins by placing one foot on the hack, a pair of rubber stoppers sunk into the ice at the far end of the sheet. Grabbing a stone by its handle, the thrower pushes off from the hack and glides forward to the hog line, at which point she must release the stone. Electronic sensors are used in competition to detect faults.

Once the stone is moving, all members of the delivering team are allowed to sweep, although it's usually only done by two team members with the skip directing. Sweeping is limited to the delivering team all the way up to the tee line, a line that bisects the house. Once a stone moves past the tee line, both teams are allowed to sweep it, although sweeping is limited to one person at a time and the delivery team has first shot. Teams can also sweep stones that have been bumped out of position.

Modern curling equipment begins with the stone, a polished circular stone no greater than 36 inches (91 centimeters) in diameter and weighing between 38 and 44 pounds (17 and 20 kilograms). Most competition stones — and all stones in the 2014 Sochi Olympic Games — are quarried from granite on the volcanic Scottish isle of Ailsa Craig known for its strength and water-resistant properties [source: Burns].

Next are the brooms. Back in the day, curlers used corn brooms not unlike the ones in your tool shed. Today, sweepers use two specialized brooms with lightweight carbon fiber handles: a hairbrush broom with short horsehair bristles to sweep away frost and debris; and a bristle-less, flat brush to create the maximum friction to warm the ice. Competition-grade brooms run from under $100 to $200 each [source: Goldline].

The last item of specialized curling equipment is footwear. One shoe has a normal rubber sole, but the other sole can be removed to reveal a slick Teflon surface, called a slider. This is the gliding shoe used when delivering stones. During delivery, pro curlers can glide more than 30 feet (9 meters) from the hack to the hog line.

The Spirit of Curling

The World Curling Federation defines the Spirit of Curling this way: "Curlers play to win, but never to humble their opponents. A true curler never attempts to distract opponents, nor to prevent them from playing their best, and would prefer to lose rather than to win unfairly...While the main object of the game of curling is to determine the relative skill of the players, the spirit of curling demands good sportsmanship, kindly feeling and honourable conduct." This is particularly important since most leagues have no referee.

Curling was invented by the Scots way back in the early 16th century, a short 100 years after they invented golf [source: St. Andrews Links]. The winter game took advantage of two abundant Scottish natural resources: iced-over lakes and ponds (Scottish winters were even longer and colder back then), and smooth river rocks. The oldest known curling stone was dredged from the bottom of a Scottish lake and inscribed with the date 1511 [source: Weeks].

In the mid-18th century, Scottish stonecutters and farmers immigrated to North America and brought their game with them, first to Canada — where it caught on quickly with the military — and then to the U.S. [source: Canadian Curling Association]. By the mid-19th century, there were curling clubs across Canada and in northern U.S. cities like New York, Detroit and Milwaukee [source: USA Curling]. The first official rules of curling were drafted by the Grand Caledonian Curling Club in Edinburgh in 1838 [source: World Curling Federation].

From the beginning, curling was foremost a friendly, social game. Historically, alcohol and curling were inseparable. Even today, rounds of curling are customarily followed by a shared drink, although Olympic hopefuls are more likely to buy each other some Powerade than mugs of lager [source: Costa].

Curling was among the sports played at the very first Winter Olympic Games in Chamonix, France in 1924. Great Britain — which includes Scotland, of course — took home the gold in Chamonix, but curling was demoted to a demonstration sport in the Lake Placid games of 1932. After Lake Placid, curling dropped out of the Olympics altogether until it returned as a demonstration sport in the 1988 and 1992 games, and finally regained medal status for the 1998 games in Nagano [source: World Curling Federation].

Outside of the Olympics, curling champions are crowned at country-specific and international events like the World Championship tournaments held for men, women, seniors (over 50), junior divisions (under 18), Paralympic (wheelchair curling), and the newest category: mixed doubles. In mixed doubles, there are only two players per team (one man, one woman) and each end is limited to six stones per team instead of eight. Additionally, one of each team's six stones is placed in position on the ice before the rest of the stones are delivered [source: World Curling Federation].

For lots more information about unusual Olympic sports and fun winter activities, check out the related links below.

By the 1990s, the top curling strategy was to get a stone close to the button and then knock all opponents' stones out of play. Worried that play was becoming boring, the World Curling Federation adopted the Free Guard Zone (FGZ) rule, in which the first four stones of each team cannot be used to knock the opponent's stones out of play (if those stones are located in the area between the hog line and the tee line, but outside of the house) [source: USA Curling]. The FGZ requires more innovative, chess-like strategies to win.

Researching this article was like sneaking a glimpse into a thriving underground civilization. I had no idea how huge curling had become. Like most of you, once every four years my awareness of curling increases from "absolute ignorance" to "hey, look at that weird sport" when the Olympics roll around. But to learn that there are curling clubs in 40 U.S. states — including one just miles from my house — and that serious curlers are regularly spending hundreds of dollars on brooms and shoes, that's a sign of a trending sport. The most eye-opening experience came after showing my young kids a video about curling, which they thought was one of the craziest things they had ever seen. After a good laugh, they immediately grabbed a heavy metal pot and two brooms and spent 30 minutes on the icy driveway sliding and sweeping like maniacs. Which makes me wonder, are there curling scholarships?