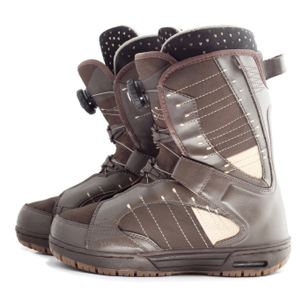 Your riding style should guide your choice of snowboarding boots.
© iStockphoto.com/photostio

Picking the right snowboard is important. But just as important is choosing the right pair of snowboard boots. After all, the boots and bindings are what link you to your snowboard. Buy the wrong kind and you won't enjoy your snowboarding experience very much. At best, you'll experience discomfort as you ride your board. In a worst-case scenario, you could put your board and safety at risk by picking the wrong kind of boots and bindings.

The first step is picking the right boots. Even a well-made snowboard won't be fun to ride if you have a lousy pair of boots. You'll want a pair that gives you the most control of your board as possible. They should provide support for your feet and ankles and protect them from the cold and the stresses you'll encounter as you ride your board.

There are three major types of snowboard boots: soft boots, hard boots and hybrid step-in boots. Soft boots give the rider flexibility and control. Most freestyle snowboarders prefer soft boots because they give the control needed to pull off difficult tricks. Hard boots are better for riders who want to ride with precision and speed -- they're a good choice for racers. Hybrid step-in boots fall in the middle -- they're both sturdy and flexible.

When trying on boots, make sure you wear the same kind of socks you'll be wearing when you're riding your board. You'll want the boot to fit snugly over your foot. It's best if you can test the boot while it's attached to a snowboard. It's important that the heel of your foot remain in contact with the heel of the boot even when you lean forward. You don't want the boot to be loose -- that would result in a loss of control while riding.

The type of boot you choose will also determine the bindings you need. There are two major categories of bindings: strap-in and step-in bindings. As a rule, any strap-in binding will work with any non-step-in boot. But each step-in boot only works with a corresponding step-in binding. So, if you want a pair of step-in boots, you'll need to buy the matching bindings at the same time.

Your choice of boots, bindings and board all depend upon your build and the type of riding you plan to do. It may seem like a lot to think about if you're eager to hit the slopes; however, a little preparation will help you have a great experience when you finally hit the snow. Have fun!

Learn more about snowboarding and other outdoor activities by following the links below.

Strap-in bindings require the rider to tighten or loosen straps to get on or off a snowboard. Step-in bindings use latches to lock boots onto a board, making it easy to get started. While strap-in bindings may be a hassle to use, they also tend to give riders more control on a ride.