If you've ever hit a patch of ice while driving your car, you've experienced a very tiny piece of what driving a bobsled is like. On an icy road, there's almost no friction between your tires and the road surface, so you can't steer very well. And any sudden moves, like hitting the brake, can send you spinning out of control.

So imagine if your car was open at the top and back — like a bobsled — and that the patch of ice lasted for almost a mile. Not a mile of straight, level road, either — a mile that's downhill and full of dramatic curves. That's what being in a bobsled is like. Drivers and crew slide down a hill on a track, or run, that's full of twists and turns. A wrong move can cause a dramatic crash.

Most of the world calls the sport bobsleigh, though Americans know it as bobsled. But no matter what you call it, bobsledding is a fast-paced sport that relies on a precise combination of skill and physics. In this article, you'll learn about the athletes that make up a bobsled team, their training and their equipment. You'll also learn about bobsled runs and the physics behind bobsledding. 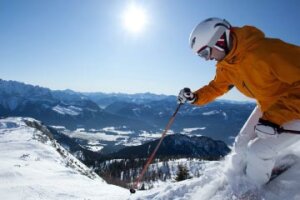