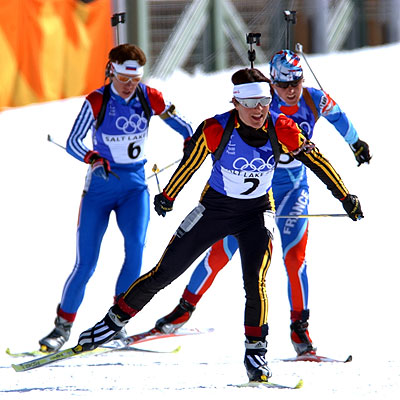 Biathlon skiing demand cross-country skiing techniques. The classical style, in which the skier "runs" on the skis, keeping the entire ski bottom in contact with the snow, is extinct in high-level competition. Instead, biathletes use the freestyle or skate method. In this method, skiers angle each ski to the side and pushes off, digging the leading edge into the snow and alternating between each ski. This basic style varies slightly, depending on the speed and incline of the section. For example, for fast, downhill sections, the poles aren't used, while for uphill sections, the skier gains thrust by pushing off of the poles.

There is one exception to the "no classical" rule, however. Because freestyle skating chews up the snow, the first 100 meters or so of the relay event are skied classical to keep the snow cleaner for the other team members.

Before every biathlon event, competitors and their coaches take to the rifle range to "zero" their rifles. They take a few practice shots and adjust their rifle sights to compensate for temperature, wind and light conditions. Metal hand-screws on the sights click for each adjustment. A coach may look at a shot and tell the athlete to adjust four clicks down, for example. In some events, coaches can give the athletes sighting advice between shooting segments. Coaches are also important during timed events. Because these races aren't run head-to-head, it be difficult for a competitor to know where she stands in relation to her opponents. A coach can give her "splits," or split times that show how many seconds behind or ahead she is in the race. This is more than merely informative -- it can provide biathletes with the competitive drive to beat the next skier.

One of the most important techniques in biathlon is almost invisible to the casual viewer -- "easing in" to a range. Due to the penalties for missing shots, it is vital to hit as many targets as possible. This is difficult when your heart is racing and your lungs are burning from the exertion of a long ski segment. For this reason, most skiers don't sprint full-bore into the range. As they approach a shooting portion, they slow down. Instead of racing, their focus shifts to controlling their breathing and resting their muscles. This can make a huge difference when the time comes to hit a target just a few centimeters wide.

Training techniques for biathlon involve racing in lower level biathlon events, cross-country skiing and taking thousands of practice shots at the rifle range, sometimes using air rifles. In summer months, biathletes use alternative forms of biathlon, as well as basic endurance training. Some biathletes use various methods to duplicate cold, harsh, or distracting conditions while firing (see Magnar Solberg's training in the sidebar below). High-altitude training gives all athletes stronger respiratory systems, but this is especially important for biathletes. Not only does their rifle accuracy depend in part on them not arriving at the shooting portion gasping for breath, but the Winter Olympics are often held in high-altitude regions.

Finally, safety is an important part of biathlon training. All biathlon teams and clubs have safety experts who teach everyone how to properly handle and care for rifles.

Norwegian Magnar Solberg was an unknown heading into the 1968 Olympics in Grenoble. He was not favored to compete well, much less win. However, a bizarre and brutal summer training regimen devised by his coach allowed Solberg to concentrate on his shooting even under the pressure and exhaustion of the 20 km event. His coach forced him to fire at a target 50 meters away while lying on an anthill, with ants crawling into his clothes and on his face.

Although not an especially fast skier, Solberg hit 20 of 20 targets. His perfection earned him a gold medal. He repeated at the podium four years later, taking gold despite missing two targets.