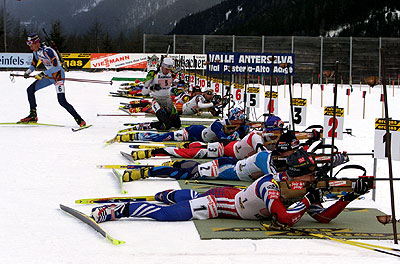 In a biathlon event, competitors cross-country ski for a pre-determined distance, and then stop at a rifle range to fire at targets. In all events, the targets are 50 meters downrange. In some events, the skiing portion is truly cross-country. In others, skiers race around a course. After each lap around the course, they stop at the shooting range.

At the firing range, each competitor has five targets, with one round of ammunition per target. In every event except individual, each missed target results in a 150 m penalty. The penalty includes skiing around a 150 m loop off to the side of the main course. In the individual event, each missed target adds a penalty of one minute to the competitor's final time.

The relay event differs slightly in that the athletes have three extra rounds at each firing range. They still have to strike five targets, but if they miss on any of the first five shots, they can load additional bullets to get the remaining targets. Loading a bullet takes five to seven seconds. Each target that remains standing after all eight shots have been fired results in a trip around the 150 m penalty loop.

Myriam Bédard, from L'Ancienne-Lorette, Quebec, Canada gave the 1994 Lillehammer Olympics one of the most thrilling moments in recent history. She had already become the first Canadian to medal in biathlon, taking bronze in 1992. At Lillehammer, Bédard dominated the 15 km event. She took a big lead in the 7.5 km event, but missed her final two shots, forcing her to ski 300 meters as a penalty. She went into the final 2.5 km 16 seconds behind the leader. At 1 km, she cut the lead to seven seconds. Bédard sprinted flat out for the last kilometer, winning the event by slightly more than one second. Not only was she the first North American gold medal winner in biathlon, she was the first Canadian woman to win double gold.