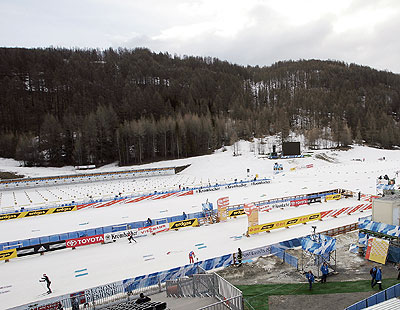 The word biathlon has Greek origins, and translates to "the joining of two contests." Any sport that combines two different disciplines into a single event can be referred to as a biathlon. Events that involve running and bicycling, running and swimming, or even skiing and running are also biathlons, but the official Olympic biathlon combines skiing and shooting.

A typical biathlon event requires participants to ski for a certain distance, usually between 3 and 5 kilometers (between 1.86 and 3.1 miles), with .22 caliber rifles strapped to their backs. When they reach the firing range, they must shoot five targets placed 50 meters (165 feet) away. They only have five shots, and for each shot that misses a target, the competitor must ski around a penalty loop of 150 m. This process repeats over three or four additional segments of skiing and shooting. We'll explain the different events in more detail in the next section.

Although skiing and shooting might seem unconnected, the sport actually grew out of hunting and military practices in use for centuries. In Scandinavian countries, skiing to get around while hunting for food was a common practice. Rock carvings (petroglyphs) in Norway indicate that ski hunting goes back to prehistoric times.

Finnish soldiers were able to fight off a 1939 Russian invasion although they were heavily outnumbered. The Finns used the cold weather and terrain to their advantage, striking quickly with ski-mounted units and targeting Russian food supplies. Inspired by this, the U.S. Army formed the 10th Mountain Division in 1941. This specially trained unit comprising experienced skiers and rock climbers fought towards the end of World War II in the Apennine Mountains in Italy.

Various "rifle and ski" clubs had competed informally in Scandinavian countries in the 18th and 19th centuries. Early biathlons differed in some important ways from the modern biathlon. There was one basic event, a 20 kilometer ski, with rifle targets placed 150 to 250 m downrange.

Recreational skiing and shooting has a long history as well. In the early 1900s, the Norwegian military began holding organized biathlon contests, which developed into a demonstration Olympic event known as Military Patrol.

By 1948, the biathlon was governed by the Union Internationale de Pentathlon Moderne et Biathlon (UIPMB). It then became an Olympic sport in 1955. The first Olympic biathlon event was held in 1960 at the Squaw Valley Olympics. Additional events were added through the years, and 1984 saw the first women's biathlon world championships. Women's biathlon became an Olympic event at the Albertville Winter Games in 1992. Biathlon finally got its own international governing body in 1993, when the International Biathlon Union (IBU) split from the UIPMB in an amicable agreement.

In the next section, we'll learn the rules of biathlon competitions.

An event that began as a summer training program for biathletes has become an event all its own: summer biathlon. Officially sanctioned by the U.S. Biathlon Association, summer biathlon replaces the skiing with running. The formats are very similar to winter biathlons, but the distances are shorter.

Some ski clubs host paintball biathlons. These events allow people to try out the sport, and it gives children a chance to get involved as well. Although paintball guns don't have enough accuracy to compare with an actual rifle, paintball biathlons present an opportunity to experience an Olympic event. Many other variations have been attempted, substituting both the mode of transportation (rollerblade biathlon, and the type of shooting (archery biathlon).