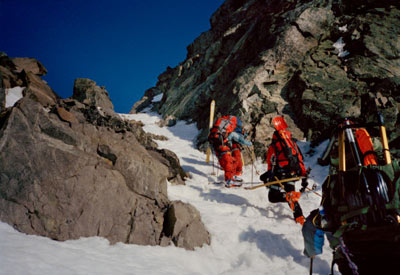 If you want to go alpine touring, the Alps would seem an obvious starting point. And ski touring in Europe is, in fact, very popular. You can travel for a week or more through Switzerland or Italy, staying in mountain refuges along the way. But alpine touring is also popular in the United States. The Adirondacks in New York are considered a good place for beginners because the mountains have a gentler slope. Beginner trips can range from one to three days.

The best time to go depends on your level of expertise. "Corn snow," prevalent in the spring, is best for newbies because there's an upper "crust" that can support weight. Also for this reason, morning trips are safer, because the temperature hasn't had a chance to rise. Powder snow is popular with more experienced alpine skiers. Fresh, untouched powder requires quicker climbing so you don't sink, but the payoff is that it also allows more of a "floating" feeling as you ski. Powder, which is more prevalent in the dark, colder days of winter, is also more dangerous because light powder can disguise rocks, stumps and ice.

No matter where or when you choose to ski, the most important consideration should be who you're skiing with. Experienced instructors who know the terrain will be able to guide inexperienced skiers away from cliffs. For experienced alpine touring skiers, it's still advisable to go with a group of people you trust -- these people may be your first and only search-and-rescue group in the event of an accident or an avalanche.

Once you've mastered alpine touring, there are plenty of competitions in which you can show off your off-piste prowess. These events are especially popular in Europe, where more than 250 races were scheduled during the 2007-08 winter season. In the United States, alpine touring competitions are also becoming more popular. The United States Ski Mountaineering Association, for instance, sponsors a series of 12 races throughout the year [source: Hirschfeld].

To learn more about alpine touring, skiing and related topics, take a look at the links below.

What is corn snow?

According to avalanche.org, corn snow is "Large-grained, rounded crystals formed from repeated melting and freezing of the snow [source: avalanche.org]."