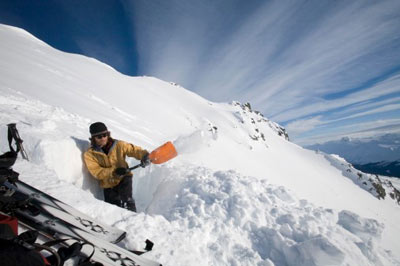 Avalanches are a danger that all backcountry skiers must prepare for, and any quality alpine tour guide will require safety equipment in case you get caught in one. According to the Northwest Weather and Avalanche Center, 24 people died in avalanches in the United States in 2006. About half of those were skiers and snowboarders [source: The Oregonian].

Alpine skiers have to be aware of avalanche danger because they're skiing in remote areas that aren't groomed or monitored. Trails that are managed by ski resorts or park services are considered safer, because these organizations use explosives to create "planned" mini-avalanches that prevent larger, surprise avalanches. Plus, they groom the snow so that it's more predictable and easier to navigate. In the backcountry, you don't have markers to guide you away from deceiving, snow-covered cliffs. Also, you won't have as ready access to emergency personnel, so you have to know how to survive on your own. It's key to have an experienced guide who knows the area and can lead groups through the more demanding and dangerous courses.

Monitoring weather conditions is one of the most important safety measures you can take to avoid getting caught in avalanche conditions. Warm weather can melt snow and ice, and refreezing can destabilize the new layer. These floating "slabs" can suddenly shift and cause an avalanche. Avalanches are especially dangerous for backcountry skiers because of the cliffs and ridges.

So, by waiting at least 24 to 48 hours after a big storm and avoiding areas where it looks like snow has recently fallen, alpine skiers can improve their chances of not being surprised by changes in the terrain.

Now that you know how to protect yourself, read on to begin planning your alpine skiing adventure.