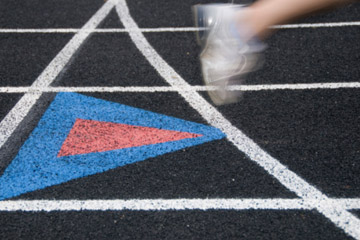 It's natural to run on your toes while sprinting.
iStockphoto/Thinkstock

After miles of running on your heels, it's the end of the race and the finish line is in sight. It's time for an all-out sprint, so you furiously pump your arms and mightily drive forward in hopes of shaving a few seconds off your finish time. During this final push, you're probably doing something you haven't done much of throughout the race -- toe-running. Well, sort of.

Toe-running is a popular term, but it's a misnomer since few people run exclusively on their toes. More accurately, it's called forefoot striking. Whatever the name, it's one of three primary strikes that distance runners utilize:

While it's common to run using more than one type of strike, most runners heel strike the majority of the time. A 2007 study observed that 74.9 percent of runners in a particular half-marathon primarily used heel strikes [source: Hasegawa et al]. But several newer running styles have popularized alternative strikes. Chi Running combines concepts from Tai Chi with a mid-foot striking pattern [source: Dreyer]. The Pose Method advocates running with an erect posture and landing on the ball of the foot [source: Pose Tech].

And then there are barefoot runners. Barefoot runners often argue that humans are intended to land on the forefoot when running, just as our hunter-gatherer ancestors did. Folks in the barefoot camp think that the heel striking required by modern running shoes has contributed to injuries and inefficiencies. The best way to return to form, they say, is to shed your shoes.

Whether you agree or disagree with the barefoot crowd, know this: A shoe-clad runner can toe-run just as well as a barefoot runner. In fact, Paula Radcliffe and Haile Gebrselassie -- the current female and male marathon world record holders -- are forefoot strikers who run in shoes. A shoeless Abebe Bikila won the marathon at the 1960 Olympics with forefoot strikes and issued a repeat performance with Pumas on his feet in 1964 [source: Olympics]. (It's also worth noting that many elite runners run with a heel strike.)

So your preference for footwear (or lack thereof) is no barrier to giving forefoot striking a go. Click ahead to find out how to make the transition.

Let's say you run with a heel strike and you want to give toe-running a shot. How do you get started?

There are a few keys to correct form. Harvard professor Daniel Lieberman and his collaborators observed the biomechanics of forefoot strikers in a January 2010 study. At the moment of impact, the foot lands on the ball underneath the fourth and fifth metatarsals, the sole is angled inward, and the toes are pointed slightly down. Next, the arch flattens and stretches as the heel comes down. The lower leg moves forward while the foot pronates (rolls inward and downward) from the forefoot to the heel. The ankle plantarflexes (toes pointed slightly down), the arch recoils, and the toes flex to drive the body upward and forward [source: Lieberman et al].

The whole motion should be gentle, and it's generally easier to grasp sans shoes. Shod forefoot strikers need to exaggerate the downward point of the toes. "That puts extra stress on your foot," Lieberman says. "It's harder to do and it takes more strength" [source: Lieberman]. For this reason, it's wise to add in a few cross-training exercises to address these delicate areas.

The Pose Method prescribes a posture for forefoot strikers in which the body leans just slightly forward with knees slightly bent, landing on the ball of the foot after "falling" forward with each stride, and lifting the opposite foot under its corresponding hip. The head points straight ahead and the shoulders are directly over the hips and ankles [source: Pose Tech].

Reformed heel strikers will need to take shorter strides than they're used to and expect an extended period of adjustment. Keep your toe-running mileage low -- no more than a mile every other day during the first week. If you feel OK, increase your mileage by roughly 10 percent each subsequent week. If you're an experienced heel-striker who is already logging a lot of miles, just introduce toe-running incrementally, gradually increasing the total amount of time in which you use your new foot strike. It takes several months to develop the calf strength, durability in the Achilles tendon, and flexibility in the ankle to toe-run competently [source: Lieberman et al].

Stretch after your runs, and be honest with yourself through the transition. Take a break if you're exceptionally sore, and if pain persists, don't fight it -- seek medical treatment.

Can toe-running prevent injury? Turn the page and let's look at both sides of the debate.

Reed Ferber, the director of the Running Injury Clinic at the University of Calgary, created a training program to increase ankle and calf strength for toe-running. Each exercise should be performed 10 times.