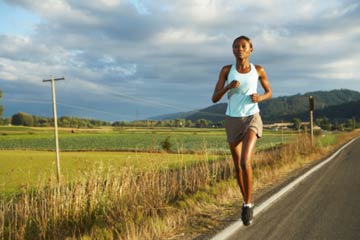 Keep your head up and look toward the horizon to boost your running posture.
Thomas Northcut/Photodisc/Getty Images

People have been running for ages. You might think we'd have it all figured out by now, but that's actually part of the problem. Because it's so easy to walk out the door and simply get started, running is about as misunderstood as it is popular. As a result, many new runners practice poor posture, which often leads to injury.

A 2010 Runners World poll found that 66 percent of all runners had an injury in 2009 [source: Burfoot]. Other studies indicate that number may be on the high side, but most agree that in any given year, roughly half of all runners have some form of running-related injury [source: Fields].

With this in mind, perhaps a good place to start is to get back to basics and simply define what running posture is. Basically, your running posture is the way you position various parts of your upper body as you run. Along with your running stride (the length and frequency of your steps), posture contributes to your overall running form.

The posture that's going to help you the most changes based on the type of running you're doing. Sprints, track, cross-country, trail running and marathons each have their own style. Beyond that, just going up or down a hill requires some modification to your posture.

Although no amount of training or good posture can guarantee a lifetime free of pain or injury, following some simple guidelines can go a long way toward making your runs more enjoyable, increasing your endurance, improving your speed and just possibly helping you avoid injury along the way. This article separates some of the proven fact from the mere hype of running posture, while offering some suggestions to help you run faster and minimize injuries. Read on to learn how to achieve proper posture, and you might find that you can enjoy running a lot more than you ever thought.

As we alluded to in the previous page, the posture for which you want to strive depends on the type of running you'll be doing as well as the elevation of your running surface. Let's take a look at what best running posture looks like for each area of your body you use while running.

For most types of running, you want to be looking straight ahead with your head raised vertically. But if you're using a rough or uneven surface, as with cross-country or trail running, look down periodically to see where your next step is going.

Keep your shoulders relaxed and straight, aligned with your body. The tendency with many is to slouch a bit or lean back, but resist that temptation. Your arms should move smoothly at your side, not crossing in front of you, with your elbows bent at 90 degrees [source: Hahn, Jones]. Even many professional runners come across the finish line with their arms going any number of directions, but this is more likely from fatigue than from their secret training manual. Not keeping your arms at your side probably won't cause an injury, but it wastes energy, and you'll tire faster. Another energy-saver is to keep your arms and hands relaxed; this means no fists. For cross-country and trail running, you'll need to use your arms for lateral balance as well as forward motion balance.

Although your back should remain straight, running is a controlled fall, meaning your center of gravity is going forward. Therefore, your torso should reflect this by leaning forward just slightly [source: Morris]. If you have trouble remembering to lean forward, one purely psychological trick is to try imagining a balloon tied to your chest, pulling you forward. Also, breathing in through your diaphragm (belly breathing) can help you maintain this posture, since breathing with your chest not only forces other parts of your torso higher, it wastes energy. Some experts frown on the traditional advice to breathe in through your nose and out through your mouth. They argue that you'll get much more of the oxygen your body needs -- and more quickly -- by breathing with both your mouth and nose [source: Eyestone].

Your hips should be in a neutral position, and it's best to avoid letting them lean forward or backward. Some studies have suggested that not maintaining a neutral hip position can lead to fatigue during a race as your muscles try to compensate, or even cause knee-related injuries during running [source: Comereski]. Ideally, your hips, torso, arms, shoulders and head should all be aligned when you run.

Now you know what your posture should look like when running, but will that form slow you down? In the next section, we'll learn how running posture relates to speed.

Running posture is all well and good, you say, but if it doesn't make you faster, then why bother? The good news is that posture isn't a zero sum game, and it can help you move not only more efficiently and safely, but also more quickly. So, if running faster is your goal (say, if you're a sprinter), then let's take a look at the parts of the upper body that have the most effect on speed and how they should be positioned.

Your head should still be facing the horizon, but if you're sprinting, it helps be looking down about three steps in front of you. Sprinters should lean their torso forward quite a lot in the opening phase of the sprint, moving to a more upright posture (but still leaning forward slightly) by the time they reach maximum speed [source: Davies].

While there's little doubt that arms provide stability, there is some belief that they can help boost your speed as well. The motion of swinging your arms can actually assist your legs as they swing forward. [source: Hahn; Jones]. At the same time, still be sure to keep your shoulders and hands loose so you can save energy for your legs. For sprinting, arm movement should bring your hands swinging from your cheeks to your hips. And you can forget the whole relaxing thing with sprinting; you can relax at the finish line. Instead, use powerful arm swings to help propel your body forward.

Of course, a lot of research remains to be done to confirm or refute the traditional (and not-so-traditional) wisdom on running posture. You'll see lots of elite runners doing all kinds of unconventional things, and it's true that some coaches think that running form is purely personal. Ultimately, proper running posture helps you breathe and move more efficiently, allowing you to run either as long or as fast as you like. Achieving it can take a lot of practice and experience, but that's part of the fun of running.

Learn even more about the best running posture, stride and form by visiting the links on the next page.

If you encounter hills on your run, you won't need to change anything for gradual slopes (1 to 3 percent), but you should make some modest adjustments for steeper slopes.

Uphill: Shorten your stride, and lean forward slightly more than usual. Concentrate on maintaining the same energy expenditure as you do on the flats. Swinging your arms lower to the ground can help your legs naturally take shorter strides [source: Luff].

Downhill: Again, take short strides, lean forward like you would normally, and avoid the bigger strides that make you slap your foot down on the pavement.