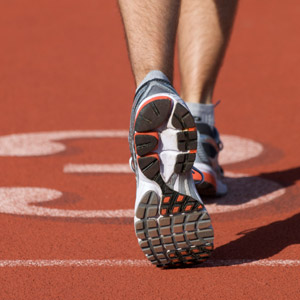 Your local track is an ideal spot to do ladders.
Thinkstock/iStockphoto

Elite runners to weekend warriors have used them them for decades to build strength and speed and keep their training interesting. They are ladders -- and with a little preparation and practice they can work for you, too.

Ladders are a form of interval training (workouts that are divided into segments of running and rest -- as opposed to a single, nonstop effort) traditionally used by runners of all distances. Ladder workouts are comprised of a series of increasing and/or decreasing intervals separated by periods of recovery. A sample workout might include running 400 meters (one time around a typical track), 800 meters, 1,200 meters, 800 meters, and 400 meters -- with each repetition separated by a 1-minute recovery jog. The name is derived from the ascending and descending lengths of each interval [source: Rodgers/Douglas].

While the basic structure of ladder workouts is the same, there are an almost limitless number of varieties. One school of thought prescribes ladder workouts with a constant, steady pace through each interval. Another recommends an inverse relationship between interval length and distance, with shorter intervals requiring a faster average pace than on the longer distances. Other ladders workouts measure the intervals solely by time rather than distance -- 1 minute, 2 minutes, 3 minutes, and so forth. If you have a heart-rate monitor, you can even target intervals to hit specific heart rates instead of a particular pace. Some ladder workouts only ascend or descend -- a workout could begin with a short interval and climax with a long interval, or vice versa.

The goal of ladders is to teach the body to become stronger, faster and more efficient. "Living organisms are necessarily frugal. They don't want to use any more energy than they have to," says Tom Derderian, a coach for the Greater Boston Track Club [source: Derderian]. Take, for example, a runner who has done 800 meter intervals until he can no longer maintain her goal pace. While another 800 meter interval may not be possible at that pace, perhaps a 400 meter interval followed by a 200 meter interval would be realistic. Over time, the body adapts to being pushed just a little bit further. On race day, that can mean the difference between a personal record and a dejected trot over the finish line.

There are a number of things to consider before beginning ladders. We get into that on the next page.

Before you speed up, slow down. You're begging for achy joints and a sunken ego or worse if you do any kind of interval training without having a good base of running fitness. You'll need to log a lot of long, slower runs over at least 8-to-12 weeks before considering ladders. These longer, less-intense runs should take up to 90 minutes (if you're in good enough shape to jog for that period of time) at a pace that allows you to maintain a conversation.

Next, determine your goal race distance and pace. A veteran runner with designs on finishing in the top 100 of the Boston Marathon will, naturally, strive to finish each interval faster than a novice training for a local marathon. Additionally, the total volume of a workout in preparation for a half-marathon will differ from training for a 5K, for example.

A simple ladder workout could include intervals of 100, 200, 300, 400, 300, 200, and 100 meters run at target pace. In preparing for a 1,500-meter race, one of Olympian Shayne Culpepper's ladder workouts involved performing two sets of intervals of 600, 400, 300, 200, and 100 meters at a mile race pace or faster. A 100-meter jog separates each interval, and 3 minutes of recovery separates each set [source: Sandrock]. A marathoner might run a warm-up of several miles then conduct intervals of 0.5 miles, 1-mile, 1.5 miles, 1-mile, and 0.5 miles at marathon race pace with matching intervals of recovery run jogging (If, for example, you run a half-mile at race pace you'd then jog a half-mile before continuing up the ladder) [source: Marathon Nation]. The permutations of a ladders workout are endless -- to be a ladder, the intervals just need to demonstrate a systematic progression.

It's best to keep the total volume of the workouts low at first and ratchet things up over time. If you're a prospective marathoner, for example, you might start with ladder intervals of 200, 400, 800, 400, and 200 meters. As training progresses, you can double the distances so the longest interval is 1600 meters [source: Runner's World]. If you are performing time-based intervals, run for greater lengths of time.

Adding a competitive component to ladders can be fun and motivating. Recruit a friend and take turns setting the pace for each interval. Just make sure that you and your partner share a comparable goal pace -- otherwise, you're risking injury [source: Brown]. And don't go overboard -- ladders should only be performed once a week early on. Once your body has adapted to the workload, you can do them twice a week.

Ladders are taxing and tiring -- so why do them? There are many benefits which we'll share on the next page.

Getting Off the Ladder

Ladders are just one part of a balanced training program and you shouldn't do them every day unless you want to end up overtrained and injured or sick. Add these workouts to complement your regimen:

One of the best things about running ladders is the specificity they provide -- instead of spending time in the pool or the weight room, ladders are a type of interval training that directly translates to better running performance.

Even if you have no ambitions of running longer distances like a half-marathon or marathon and you're perfectly content with your pace, you might consider adding intervals to your routine. Intense interval training has been shown to increase not only speed but cardiovascular fitness and the body's ability to burn fat, even after returning to workouts of lower intensity [source: Jaret]. In fact, interval training isn't necessarily synonymous with speed training -- speed is simply a by-product of training the body to use oxygen efficiently. "The idea of interval training is to take a race, break it into pieces, and reassemble the pieces," Derderian says.

There is little or no research comparing the performance of athletes who do ladders-style workouts versus athletes who do straight, uniform-distance intervals. But there are distinct psychological benefits to completing intervals with varied lengths. "You have a biochemistry going on [in the muscles], but you also have a brain and a social aspect. People are training for reasons other than manipulating their biology," Derderian says. Former Olympian  Culpepper said that intervals of uniform distances were daunting, but ladders helped trick her mind into completing her workouts [source: Sandrock].

Similarly, ladders can make an impossible distance seem surmountable. A fatigued athlete might find he can't complete the final mile of a run, but hecan tack a ladders workout of the same length on to the end of a session and break the distance into several shorter intervals.

They're Not Just for Runners

Ladders can be applied to any sport that involves covering a measurable distance, from swimming to cycling to … horse racing? "The Bowed Tendon Book" outlines descending ladders workouts for horses with 1-mile, 3/4-mile, and 5/8-mile intervals. An Irish mare named Stanerra won the 1983 Japan Cup horse race after a training regimen that included ladder workouts [source: Ivers]