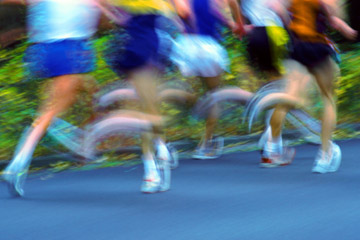 When you cross your lactate threshold it becomes increasingly difficult to maintain your pace.
John Foxx/ Stockbyte/Thinkstock

If you're a seasoned triathlete, or even if you just finished your first 5K road race, you've probably heard something about lactate threshold training. But sometimes long, scientific-sounding terms can just be fancy names for snake oil. It's hard to distinguish the valuable stuff from the gimmicks. So, where does lactate threshold training fit in?

A chemist discovered lactic acid (or lactate) in the 18th century, but its applications to fitness weren't studied until the middle of the 20th century. Back then, scientists thought lactic acid was a waste product that was bad for muscles, and coaches warned athletes to stay below their lactate thresholds or suffer body aches and poor performance. Now scientists understand that lactate is beneficial to the muscles, as well as other parts of the body, including the brain. While physiologists keep learning more about what lactate does, coaches and trainers have learned ways to use the lactate threshold to an athlete's advantage.

Sports physiologists have learned, however, that your lactate threshold can be raised with proper training. Athletes can teach their bodies to use lactate more efficiently, so it takes longer to build up in their blood. Runners who raise their lactate threshold can pick up their pace and get to the finish line quicker.

So what is lactate, anyway? Read on to learn more about lactate and your muscles.

Lactate is a chemical that builds up in your muscles during hard work. When you "feel the burn" during intense exercise, you can bet that your muscles are bathing in lactate. You will also feel the need to slow down and end the discomfort.

But what is behind the burn? Muscle cells get most of their energy from a substance called adenosine triphosphate (ATP). ATP gives muscle cells the ability to contract and propel you toward the finish line. While your muscles are using ATP, other chemical reactions are making more ATP so that your muscles won't run out of energy. The body stores energy in substances like fat and glucose, and chemical reactions break down those substances to release ATP [source: National Skeletal Muscle Research Center].

When you're moving at an easy pace, muscles get most of their energy from fat. Fat is an excellent source of stored energy. The human body is very efficient at using fat for energy, and muscles can go for a very long time without tiring out. The catch is that the process of turning fat into energy is not very fast and it takes lots of oxygen [source: National Skeletal Muscle Research Center].

So what happens if you need lots of energy fast -- like during a sprint? Your body can't use fat for quick energy, so it uses glucose, both in your blood and stored within your muscles as glycogen. Muscle cells can use oxygen to change glucose into energy. This process is called aerobic metabolism, and it is very efficient. Muscles can also break down glucose without using oxygen, which is less efficient but lightning-fast. This is called anaerobic metabolism and lactate is one of its by-products [source: National Skeletal Muscle Research Center].

When you're working at maximum capacity and your muscles are producing lots of lactate, you are at your lactate threshold. You know what it feels like, but experts disagree on the details. Scientists used to think that lactate caused muscle fatigue, but now they aren't so sure -- some scientists think the "I can't move another inch" feeling might be caused by other substances that are released around the same time [source: Westerblad et al]. No one is really sure exactly what causes the burn either, but lactate is part of the picture. One thing trainers agree on is that when you train hard enough to push your lactate threshold higher, you can make it to the finish line faster. That is the goal of lactate threshold training.

Still sore the day after a tough run? Don't blame lactic acid. Lactate is completely flushed out of your muscles within an hour of completing your workout. Your misery probably comes from microtrauma in your muscles [source: Burke].

The History of Lactate Threshold Training

Muscle experts started paying attention to lactic acid back at the beginning of the 20th century, when Dr. Otto Meyerhof studied muscle activity in frogs. Meyerhof cut a frog in half, put the bottom part in a jar, and used electrical shocks to make the muscles contract. This only worked for a short time, though, before the legs stopped jerking. Meyerhof found high levels of lactic acid in the muscles, and decided that the lactic acid must have made the muscles stop working [source: Kolata]. Meyerhof's scientific study of muscles won him the Nobel Prize in 1922.

W. H. Owles first wrote about the lactate threshold in 1930 and the idea of using the lactate threshold for sports training caught on by the mid-1960s [source: Viru]. For decades, scientists and coaches thought lactate was bad for muscles. Following Meyerhof's reasoning, experts saw lactate as a waste product that muscles made during the anaerobic breakdown of glucose. Not only was lactate a waste product, it was maligned as causing muscular acidosis. That is, since it is an acid, scientists thought that it prevented muscles from working very well. Coaches warned athletes to train below their lactate thresholds to keep from harming their performance and causing muscle aches. Many people still blame lactic acid for their sore muscles the day after a workout [source: Kravitz].

Lactate's reputation got a helping hand in the 1980s from biologist Dr. George Brooks. Brooks' hypothesis, called the Lactate Shuttle, says that muscles actually use lactate as a fuel during exercise. Brooks found that mitochondria (the parts of cells that make energy) even have a special protein that moves lactate inside them for use as a fuel [sources: Brooks, Kolata]. Also, lactate production happens in muscles at a time when lots of extra protons are floating around, making the muscles more acidic. Pyruvate molecules absorb some of those protons and turn into lactate, so lactate production actually makes the muscles less acidic, not more so [source: Kravitz]. Lactate did not deserve its reputation.

So will all this science help your race times? Read on to learn the benefits of lactate threshold training.

So what should you do to start lactate threshold training? First, step up the volume. If you are training for a marathon, for example, gradually increase your mileage. Increase your mileage by 10 percent per week -- if you increase too fast, you'll risk winding up at the doctor's office instead of the finish line. Keep increasing the mileage of your long runs until you reach your goal [source: Kravitz].

In addition to maximal steady-state workouts, lactate threshold training involves the use of interval workouts. In interval training, you do short, intense workouts that are above your lactate threshold level. For example, to train for a 5K race, you might do three 1-mile runs at or a little above your racing pace, with a brief period of recovery in between [source: Dalleck, Kravitz].

Make sure that interval training and maximal steady-state training combined only make up 10 to 20 percent of your total workout time for the week, otherwise you'll become overtrained and risk injury. Make sure you feel well rested before you jump into a tough workout [sources: Dalleck, Kravitz; Morris]. It's also a good idea to consult a personal trainer, who can help you get the hang of things. Training the right way will keep you moving forward toward your goal.

The three components of lactate threshold training are: