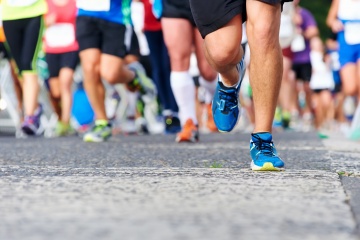 Although it seems counterintuitive, running backward has health benefits.
warrengoldswain/iStock/Thinkstock

It's been a grueling race, but you're nearing the finish line, and all your training is about to pay off. This may be your first marathon, but you already know it won't be your last. For the past 20 miles, you've kept a steady pace, each step eating up the distance you have yet to go. But just as you're about to give yourself a mental pat on the back, you hit the proverbial wall. Your legs feel like they're dragging concrete blocks. Your lungs burn. If you weren't so exhausted, you'd even cry as you plod toward the finish line.

Now, imagine running the same course backward. Is that even possible? Yes! In fact, it's been done in record-breaking fashion. In 2004, Xu Zhenjun of Beijing ran 26.2 miles backward in 3 hours, 43 minutes and 39 seconds. And in 2013, a 32-year-old ran Illinois' Quad-Cities Marathon backward — while juggling — in 5 hours and 51 minutes [sources: Guinness World Records, Savedge].

Besides earning your place in a record book (or at least in the annals of absurdity), is there any good reason for running backward? As a matter of fact, there are some real physical benefits to the activity. Researchers at the University of Milan have discovered that running in reverse as a training method can improve runners' forward-facing performance. During the study, sensors and cameras captured the runners' backward movements, marking the moments their feet touched down near the toes and pushed off from the heels, a process nearly opposite the motion used in forward running.

Researchers discovered that when runners run backward during training, their joints suffered less impact than when they run forward. In addition, the runners expended 30 percent more energy running backward over the same distance as facing forward, which could benefit runners building endurance for forward-facing runs. What's more, another study showed that backward running was easier on the knees in general. By running in reverse, the study's participants put less strain on the front of the knee [sources: Cavagna et al, Roos].

Of course, there are some drawbacks to running in reverse, including the simple fact that you can't see where you're going. Some backward runners mitigate this problem by wearing a bicycle helmet with a rearview mirror, while others simply pair up with a forward-facing running partner. Also, when you run backward, you probably can't go as fast — at least, not when you begin. Practice enough, aiming modestly for a half marathon, and you can aspire to beat the current record-holder, Achim Aretz of Germany, who ran the 13.1-mile distance in 1:40:29 [source: Guinness World Records].