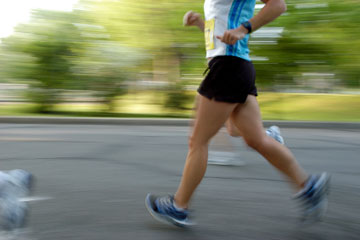 If you run 50 to 70 miles per week, you are an advanced runner.
©iStockphoto.com/groveb

Out of fear, need for food and fun, humans have been loping long distances since time immemorial. Indeed, as many as 2 million years of running, jogging, dashing and scampering probably raced by before formalized professional competitions began gaining popularity at the turn of the 19th century. The sport of running tapped into something primal and innate; over the century that followed, it gained enough ground in Great Britain, and later, the United States, to render coaching a marketable skill. In the early 20th century, stopwatch racing and the expansion of foot races were introduced around the globe [source: Sears].

Structurally, the human body has always been ill suited for sprinting. Even the best human sprinters can only achieve speeds of about 22.8 miles per hour (36.6 kilometers per hour) and can only maintain that rate for less than 15 seconds. Compare that to cursorial specialists -- animals specifically adapted to fast running, such as horses, greyhounds and pronghorn antelopes. They can gallop at around 33.6 to 44.7 miles per hour (54 to 71.9 kilometers per hour) for several minutes. Fast running also takes a greater toll on humans, burning double the metabolic energy per distance traveled than would be typical for another mammal of equal body mass.

Endurance running, which uses aerobic metabolism to power movement over long distances, is quite another story. Of all the primates, only humans lope, and we're surprisingly good at it. Indeed, distance running is rare, even among quadruped mammals. Only social carnivores (like dogs and hyenas) and migratory ungulates (such as wildebeest and horses) engage in this kind of running [source: Bramble].

Today, running bestrides the world as a sport, an industry and even as a demographic. Statistically, core runners (people who run and train year-round) are highly educated, moderately affluent, and favor a 5 kilometer (3.1 mile) run, second only to a half-marathon. With proper training and practice, most healthy individuals can achieve a 5K (3.1 miles), and the numbers reflect this: The average age among core runners clocks in at around 38.6 years old [source: Running USA].

As the popularity of running the 5k has grown, so too has interest in maximizing performance via advanced training techniques. This raises a question: What constitutes "advanced"? Well, the term certainly falls into the realm of the subjective, but if you run about 50 to 70 miles (80.4 to 112.6 kilometers) per week and can crank out a 5K in less than 17 minutes (men) or 20 minutes (women), then you probably qualify.

If you're ready to kick your 5K into high gear, read on.

An advanced plan for 5K training differs from novice or intermediate training primarily in these ways:

Advanced 5K training schedules vary according to your needs and goals, and should be adjusted to address individual weaknesses. In other words, you'll need to spend some time working out the kinks, since what works for one runner might not work for another. That said, most advanced 5K plans share certain characteristics in common; any good plan should be cyclical, allowing muscles time to recover.

An advanced 5K training schedule will typically include:

Strength training, particularly core workouts, can be a valuable addition as well. You should also incorporate the occasional race as a fitness check and a chance to practice your racing skills.

Each of these fundamentals affects your body differently. Combined, they will boost your conditioning, endurance, speed and energy. Let's take a look at them individually.

VO2 max runs improve the efficiency with which your body delivers oxygen to muscles and the effectiveness with which your muscles use that oxygen. Essentially, they tune up your heart while transforming your legs into a pair of pistons. The most effective approach: Maintain a pace slightly faster (10 to 30 seconds per mile) than your 5K race pace. This will be a bit taxing, so you'll only keep it up for about 800 meters (or three to five minutes), repeating it six to eight times with a jog between repetitions.

How long a jogging break you should take remains a matter of some debate and probably varies according to your goals and your body. A four- or five-minute jog will promote overall efficiency but probably won't shave much time off of your race pace. If that's your goal, then you'll want very short intervals (50 meters, 164 feet, or about 20 seconds) of jogging between speed runs. Whatever your goal, resist the urge to run much faster than just above your race pace.

A tempo run is a run where you maintain a pace just below the threshold at which you produce too much lactic acid for your body to process. Staying below this anaerobic threshold allows your body to rid itself of, and even reuse, lactic acid. If you exceed that threshold, lactic acid will enter your muscles, slowing you down and causing that familiar "burn." By running just below this threshold, you can raise your anaerobic "ceiling" over time, increasing the speed you can maintain before crossing over into the burn zone.

Long runs (runs longer than 5K) improve your overall fitness by working your muscles and aerobic systems for longer periods of time.

Now that you're on the right track, let's fine-tune with a few tips.

VO2 max, also known as maximum oxygen uptake or aerobic capacity, is the maximum amount of oxygen the body can use during a specified period of usually intense exercise. Doctors, coaches and trainers often use it as a measure of fitness.

Lactic acid is a byproduct of anaerobic metabolism and the cause of that "burning" sensation you get in your arms and legs after a hard race or a day of weightlifting.

Now that you've nailed down a training schedule, here are a few more tips to keep in mind:

Stretch, warm up and cool down. Begin and end your sessions with five to 10 minutes of easy running. Be sure to stretch properly, too. Medical science continually adjusts what qualifies as a good stretch and what constitutes a harmful stretch, so find an expert who stays current and can show you the difference.

Don't run the easy runs at too fast a pace. Cyclical training works by alternating hard training (which breaks down muscle) with recovery (which builds it back up stronger than before), building a stronger, faster and better prepared body in phases. It may seem counterintuitive to hold yourself back on the easy runs, but all of those hard training runs, interval workouts, and long runs will be wasted if you don't give your body a chance to recover.

Get a partner or two. Having someone to help motivate and challenge you can lighten your load immeasurably, and can make the crucial difference between rising to meet your goals and letting setbacks get the better of you.

Don't run at all on rest days. Instead, engage in other light exercise. "Rest day" doesn't mean "lazy day." Enjoy a walk, ride a bike or go for a dip in the pool while your body recovers and incorporates hard-won gains from your hard runs.

On race day, kick off your trainers and slip into some racing flats. Yes, they actually do make you faster. Research has shown that dropping as little as 200 grams (about 7 ounces, roughly the weight gap between training shoes and racing flats), equates to shaving 1 to 2 percent off your time over a given distance. In a 24-minute 5K, this equates to taking 12 to 20 seconds off your time [source: Rennie].

Don't begin the race at too fast a rate. Every world record holder, from the 1500 meters to the marathon, has beaten the best by running the first half of the race slower than the second half (known as "running a negative split"). Adrenaline, along with the jitters and heat of competition, might make it a struggle to rein yourself in, but that's what you'll have to do if you want to eke out your fastest possible time.

Listen to your body. Forget one-size-fits-all programs; self-monitoring will tell you what works for you. Bear in mind, too, that you'll have strong days and weak days, so be willing to shuffle your schedule around occasionally to compensate.