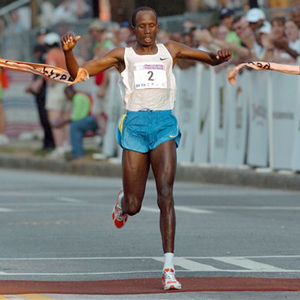 Every Fourth of July in Atlanta, Ga., tens of thousands of people converge on Midtown to run the Peachtree Road Race. Often considered one of the premier 10-kilometer or 10K (6.2-mile) races in the United States, the Peachtree Road Race tests a runner's ability to not only tackle a challenging course, but also the extreme heat and humidity of Georgia's summers. And there are plenty more races where that came from. Throughout the year avid runners seek out 10Ks throughout the world as the distance has become very popular to competitive runners.

Marathon runners compete in similar races over much longer distances (26 miles, 385 yards to be exact, or 42.2 kilometers) on an outdoor course. At the Olympics, the 10,000 meters, which is run around an oval 400-meter track, is often considered the premiere test of speed and endurance. Sort of a hybrid of the two, the 10K is run over a natural course and varying conditions thus times may vary. For instance, Micah Kogo of Kenya ran a 27:01 in a 10k race in Brussels in 2009 and is the current world record holder as of this writing. That's nearly a minute slower than Kenenisa Bekele's world record of 26:17.53 in the 10,000 meters. Keep in mind though, Bekele's record, was run on a flat, premium running surface. Think of it as the difference between a NASCAR oval track and a sports car road course.

So what does this all mean? Simply put, running has been a popular form of exercise for many years and as you can see, it's also turned into a pretty serious sport too. Which brings us to why you came to read this article. You've decided to explore what it takes to run competitively in a 10K race, -- you're looking for the right training method to prepare you for such a grueling task. We've got you covered. This article will detail what it takes to get you up to speed in advanced 10K training. We'll start by breaking down the core of the training regimen in the next section.