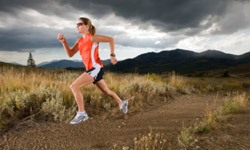 Running may be one of the most efficient, accessible ways to stay fit. It doesn't require a gym membership, and you don't need expensive equipment -- all you have to do is step out the front door and be on your way. Running is also wildly popular. According to Running USA, the number of road race participants increased from around 4 million to more than 9 million between 1998 and 2008. Hit any park or jogging trail on a nice day, and you'll likely find it populated with runners of all shapes and sizes -- from weekend warriors trying to keep the spare tire in check to seasoned marathoners putting in their daily 10 or 15 miles.

And while part of its attraction is that nearly anyone can do it, running is an activity in which small variables can make a big impact over the course of a 2- or 3-mile (3- to 5- kilometer) jog. One of these variables is proper running form, which many runners -- particularly newbies -- ignore. In this article, we'll explore the role form plays in running and how applying certain techniques can improve performance, efficiency, endurance and even help prevent injuries.

Running isn't limited to a particular body type or physiology. If you're able to run, you can become a runner. But as you increase your speed, distance or frequency, you may also improve by altering your stride. Essentially, you want to use your energy to propel yourself forward fluidly and minimize the energy wasted on unnecessary or inefficient movements. For example, vertical oscillation -- when you project yourself upwards -- increases the impact when you hit the ground. The impact from running is three times your body weight [source: Science Daily]. So, reducing vertical oscillation eases joint stress and redirects energy for forward movement. To do this, concentrate on landing more softly and see how quietly you can run. If you're thudding away down the street, chances are you're exerting too much downward energy.

Body mechanics don't develop overnight, and changing them can take time. But one way to improve your stride is by increasing your turnover rate. To determine your turnover rate, simply count your steps during one minute of running. Once you know that number, you can begin to improve it. Some runners help boost their turnover rate by carrying a handheld metronome and timing their steps to the beeps until a steady rhythm becomes natural. Another method is to try increasing your turnover in short intervals, lengthening each session until you're comfortably covering more ground without extending your stride.

Experienced runners know that the less contact their feet have with the ground, the better. According to Runner's World, elite distance runners average about 180 steps per minute while most casual runners will be a little below that figure [source: Eyestone]. Higher turnover rate increases speed and reduces the impact and level of contact with the ground, but without dramatically increasing effort.

There are 26 bones in the human foot, and each has a role to play when it comes to running. There are basically three ways a runner's foot hits the ground: rear footstrike, mid footstrike, and fore footstrike. How runners should land is an area of much debate and research, with very few definitive conclusions. The argument continues about which is best, but the most effective is probably the one that comes most naturally.

Rear footstrikers -- runners who land heel-first -- put less stress on their calf muscles, and because most running shoes are heavily padded in the heel, the impact is reduced. But this also creates a braking effect, essentially bringing the runner to a complete (if infinitesimal) stop with each step.

Runners who hit the ground with the ball of their feet and heel touching the ground simultaneously may experience fewer foot injuries because the impact is distributed over a larger surface area. But this method might be a little slower than the rearfoot strike.

Finally, those who land on the forefoot apply less pressure on their knees and ankles because the bounce of landing on your toes creates a natural cushion. It's also fast, and it helps direct energy forward, which is why sprinters often employ this method. But this is also hard on the calves and may cause premature muscle fatigue for distance runners.

One of the latest fitness fads is to run barefoot. Proponents insist that jettisoning over-engineered, over-priced athletic shoes and instead padding down the road in bare feet is a more natural, safer approach, because the runner instinctually runs on the balls of his or her feet. This results in lighter treading, reducing the impact that comes from pounding away in shoes. According to the Journal of Strength & Conditioning Research, most shod runners (runners wearing shoes) land heel-first because most shoes have padding in the heel. Barefoot running enthusiasts cite footstrike as the primary reason shod runners encounter more injuries and deal with more aches and pains associated with running.

Posture isn't important just at grandma's house. Proper running posture can increase your lung capacity and stride length, improving the efficiency of oxygen exchange and making you go faster. Your posture also sets the tone for the rest of your body. The position of your torso impacts your head, shoulders, arms and hips -- all critical components to your running form. Ideal running posture means looking straight ahead, not at the ground. This naturally straightens your back so that it's vertical and perpendicular to the ground. It also opens the lungs and lets you draw deeper breaths, oxygenating blood more with every breath. Your shoulders should be square, but not robotic. Keep them level and relaxed, minimizing the amount of side-to-side swing that can cause the rest of your body to compensate for being tilted off balance with every step.

One trick for improving your posture is to try to take a deep breath in through the nose and out through the mouth while you're running. This will cause you to extend and become more upright. If you can breathe more easily and comfortably maintain this posture, you were probably slouching to start with. 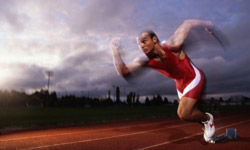 Arm movement is the body's way of counterbalancing leg turnover. Watch any race, and you'll see some runners pumping their arms like mad, and others who keep their arms at around chest height with very little movement. As momentum and gravity drive you forward, your arms are keeping you from tilting off balance. A natural instinct for runners is to try to use their arms to drive themselves forward, but this an unnecessary waste of energy. Just like with your stride, your arm movement should be comfortable and as fluid as possible. In "Jeff Galloway's Book on Running," expert Jeff Galloway recommends less arm swing. "The arm motion won't help you run farther or faster," he says, "but too much arm motion can slow you down through upper body fatigue."

So, while our arms play an important role in running form and can help us run more efficiently, it's important not to overemphasize their use and risk burning valuable energy that could be redirected down toward the legs, where the real work is happening.

You've probably seen runners bounding down the path, springing from foot to foot, catching air with each step. It looks really athletic, but it wastes energy, can cause you to run slower and increases the risk of injury. The higher you go between each step, the farther you have to fall and the more you decelerate with each step. This killed momentum has to be regenerated, leading to muscle fatigue, joint strain and an inefficient stride. Reduce bounce by concentrating on keeping your feet close to the ground between steps. This will not only limit the time you spend in the air, but it should also quicken your stride.

You can also recruit your arms to help decrease bounce by keeping them bent at a 90-degree angle and minimizing the swinging motion. This will help keep your momentum in check, holding you closer to the ground between strides.

If you're interested in becoming a runner, it doesn't have to be complicated. It really can be as simple as going outside and putting one foot in front of the other. But paying attention to your form can help make your runs more enjoyable -- and safer. For lots more information on running and proper form, read on to the next page. 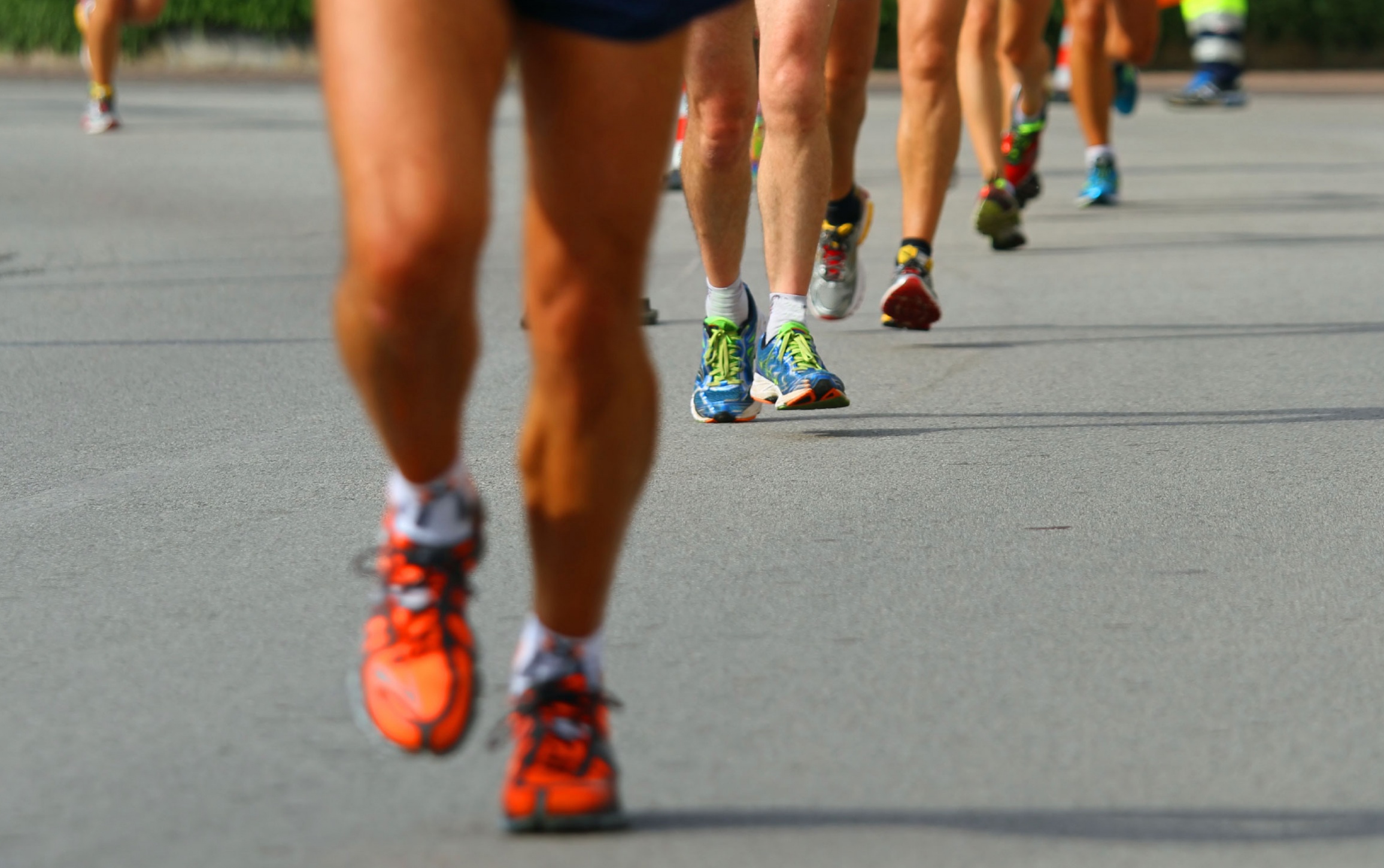 Second winds depend on a number of factors, including exercise intensity and frequency. Find out what is going on in your body when you get a second wind.