by Tristin Hopper
Prev NEXT
3

Maybe you're just under-challenged. After months of sticking to an exercise routine, you've finally outgrown your running workout. Your lungs are tougher, your legs are stronger -- and 30 minutes around the neighborhood just doesn't cut it anymore. It might be time to ratchet up the difficulty level.

Start with some good, old-fashioned resistance. A backpack stuffed with filled water bottles is an easy way to burn a few more calories without increasing your run time. To pack on the pounds without putting undue pressure on your back, pick up some ankle weights, wrist weights or even an adjustable weight vest. Some retailers can even set you up with a full-body "heavy suit."

Instead of maintaining a steady pace throughout your run, switch it up with some sprints. Midway through your run, launch into a 30-second, all-out sprint before returning to your normal pace. Once you've recovered, do it again. Not only is sprinting exhilarating, but it's an exponentially better workout that jogging. Researchers at McMaster University found that, fitness-wise, doing four to six sets of 30-second sprints was as effective as doing 40 to 60 minutes of moderate-intensity exercise [source: Parker-Pope].

A run is also a great time to start working on your upper body strength. There's much more to running than your legs, and a strong upper body can help your speed and endurance. Also, with a strong central "core," you'll be less at risk for joint and spine injuries typically associated with jogging [source: Greenwald]. Not convinced? Take a look under the shirt of any Olympic sprinter and you'll see an immaculately sculpted six-pack [source: Wood]. During your run, take along a set of bar bells. The natural movement of your arms should give them an ample workout.

Turn the page to find out why joggers hate sidewalks.

While pushing yourself is a key part of a jogging regimen, you should never do it at the expense of a rest day. Muscle fibers rebuild themselves on your days off, and if you aren't giving them that chance, you may be doing more harm than good to your overall performance [source: McManus]. 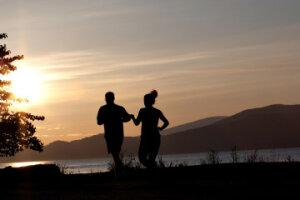 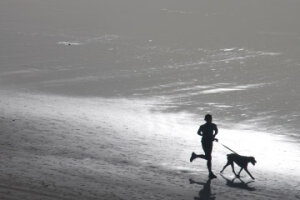 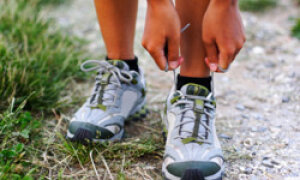