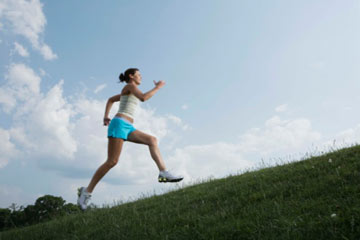 Running is a different movement than walking. It's evident that this woman is running, even in this still photograph.
Â©Getty Images/Jupiter Images/Thinkstock

Ever since Sir Isaac Newton put quill to paper and created his laws of motion, the branch of physics that deals with the force exerted on objects that causes them to move, people have looked at running and walking as virtual equals. Both move a body from one place to another. Since the body doesn't change -- your weight stays the same whether you're walking or running -- it should take the same amount of energy to move your body, no matter how you move it. If that wasn't enough, walking and running use up the same amount of energy; in other words, they burn the same amount of calories.

Yet, joggers had long noticed that walking and running produced different results when it comes to weight loss, or a person burning more calories than he or she takes in. It would seem that running in fact does burn more calories than walking.

What the researchers found wasn't a flaw in Newtonian physics. Instead, they pointed out that people who thought running and walking required the same energy were overlooking a major point: They don't. Running actually requires more. How did they miss something so important? Find out on the next page.

For more information on running and energy, see the links on the next page.

Is Running Every Single Day Good for Your Body?
Surprising Number of Marathoners Had Kidney Damage in Small, New Study
Could Turkey Trots Get a Whole Nation to Run?