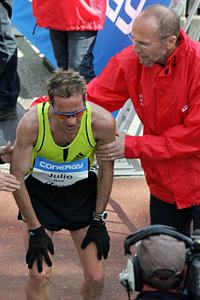 If you've ever watched a NASCAR race to the end, the first thing you see drivers do after pulling into the pits is chug a bottle of water or a sports drink. Spending four hours in the cockpit of a stock car takes its toll. It takes its toll on the car's engine, too. Unlike a car's engine, though, the human body can be damaged beyond repair if it isn't properly taken care of during a race. Keep that in mind the next time you're running a distance race.

Upon completing a grueling distance road race, the human body is running on fumes. No matter how well you've trained and how good your nutrition plan is, your body simply runs out of gas. That's why it's critical you refuel properly after a race.

The first 30 minutes following a distance run is often considered the recovery window. Because you just ran the tank dry, so to speak, you're susceptible to muscle damage. Eat something low to moderate on the glycemic index (GI) within the first 30 minutes of finishing your race or long run. This will jumpstart the glycogen replacement process. Since glycogen fuels your muscles, your carbohydrate intake during this 30-minute window will decrease the chance of muscle damage.

Target approximately half your body weight in grams of carbohydrates. Add protein, too. Try to target 75 of your calorie intake to carbohydrates and the other 25 percent in protein. Unlike what you eat before and during a race, what you eat after a race can be a bit more liberal. You don't need to pay as close attention to the GI level as you do calorie count, protein and potassium content. But you certainly don't want to simply refuel with high GI foods. Give your body some slow-releasing (complex carbohydrate) fuel, too.

It's also time to start replenishing electrolytes the body lost during the run. When you run, you obviously sweat -- a lot. Just like those race-car drivers. And in that sweat are electrolytes. Have you ever wondered why sweat tastes salty? It's the sodium in your body's electrolytes. Those electrolytes are critical to the health of your body's cells. It's why dehydration is so dangerous. When you lose those electrolytes, you're essentially depriving your body of its ability produce electrical currents that make your muscles (including your heart) contract. Sports drinks are heavy in sodium and potassium -- both found in electrolytes. They also contain sugars, which give you some added instant energy. Drinks like Gatorade are high (89-100) on the glycemic index. Bananas are great during the recovery window, too, because of their potassium content.

After you've cooled down and are safely out of the 30-minute recovery window, it's time to get back on your training diet. Go back to your regimen of eating as if you'll be training the next day.

The main thing to keep in mind after a distance run or race is to get some fuel back in the body quickly. The better you manage your diet and nutrition the better chance you'll have at reaching an elite running level. Diet is crucial. If you forget to refuel during the recovery window, you could set yourself back.

Don't forget to take a look at similar running and exercise articles on the next page before you bolt to plan your next training session.

Surprising Number of Marathoners Had Kidney Damage in Small, New Study
How many calories does running burn?
Is coffee bad for distance runners?