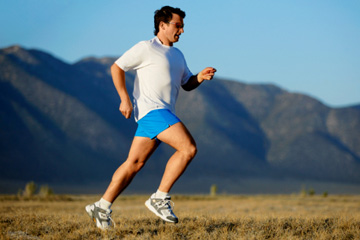 Is coffee a runner's secret weapon or a dastardly foe?
Jupiterimages/Thinkstock

It's the day of the big race. You've got your running shoes on, your lucky rabbit's foot in hand and your starting number pinned to your tank top. You've trained for weeks for this marathon, but have you shortchanged yourself by not having a cup of coffee?

Studies about coffee can be a tricky thing. It seems like one week scientists find that coffee is bad for us, the next week they announce it provides untold benefits. When it comes to coffee's star ingredient, caffeine, the results are much clearer in relation to athletes: Caffeine can improve performance. It is, in fact, one of the few legal performance enhancers in the world. In study after study, athletes who consumed caffeine before a race or event were able to go faster, last longer and recover more quickly than athletes who didn't have the extra boost. In the studies, performance improves by 20 to 25 percent, though in real-world scenarios the effect might be a little less [source: Kolata].

Caffeine helps runners in several ways. For one, researchers have found that caffeine causes muscles to use fat as fuel, rather than glycogen stored in the muscles, which increases stamina. Caffeine also amps up muscles by releasing calcium stored within, which aids speed and endurance. And it affects how hard you think you're working, so that you can run longer and harder without feeling exhausted.

You don't even need that much caffeine to get the full results; scientists estimate that between 1 and 2 milligrams of caffeine per kilogram of body weight will do the trick [sources: Kolata, Metcalf]. For a man weighing 175 pounds (79 kilograms), that's 350 milligrams of caffeine, or about two-and-a-half cups of coffee [source: Metcalf]. More isn't better, though -- it's possible to perform worse when you consume more than 9 milligrams per kilogram [source: Kolata].

Caffeine can have detrimental side effects in people who aren't used to it, most notably jitteriness and headaches. If you're not a regular coffee drinker, these side effects may be reason enough not to have a cup the morning of the race. Coffee is also discouraged for those who have heart conditions or high blood pressure; check with your doctor before drinking coffee and exercising.

Of course, we must make note of the stomach issues that coffee can cause. In some runners, coffee and other caffeinated products can result in diarrhea, while other runners rely on their morning joe to clean the system out before a long race. For this reason, it's probably best to not drink your first cup of coffee the morning of a marathon; instead, see how your stomach reacts during a few training sessions. And contrary to popular belief, coffee won't dehydrate you while you exercise. It may not even act as a diuretic while you're exercising -- though scientists don't know the exact mechanism, it appears that exercise short-circuits caffeine's effects on the kidneys [source: Metcalf].

So, put your shoes on -- and bottoms up!

Surprising Number of Marathoners Had Kidney Damage in Small, New Study
How to Run in the Cold
How to Prevent Running Injuries