What are the toughest marathons in the world? 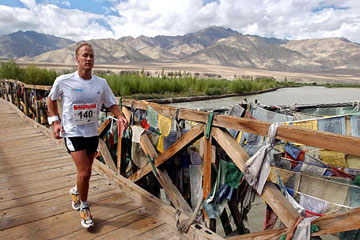 The Great Tibetan Marathon in India and Tibet is the world's highest marathon. It's peanuts compared to some of the toughest marathons in the world.
Rafiq Maqbool/AP Images

After a few exchanges though, some commonalities begin to emerge. Of course, any marathon is demanding, but some are definitely tougher than others. The world's toughest marathons are set in some of the world's most grueling terrain. For example, Pikes Peak and Leadville are both trail marathons, which means that exposed roots, muddy ruts, tree branches and crowded, narrow stretches where runners may actually have to step into the woods to allow a faster runner to pass are all par for the course.

Both Pikes Peak and Leadville are in Colorado, the home of the Rocky Mountains, and both courses take advantage of the hilly terrain. Runners of the Pikes Peak marathon climb more than 7,000 feet (2.13 kilometers) during the run, and much of the course is found at an elevation over 12,000 feet (3.66 kilometers) -- above the tree line. The organizers point out that the air is so thin here that runners often take 30 minutes or more to run a single mile [source: PPM.org]. Leadville isn't any kinder, taking runners to Mosquito Pass at the highest point of the course, with an elevation of more than 13,000 feet (3.96 kilometers) [source: LT100].

Race organizers elsewhere in the world make use of difficult trail conditions to create incredibly grueling marathons as well. Perhaps the toughest mountainous marathon is the Jungfrau Marathon, held at Interlaken, Switzerland. Runners face a climb of nearly 6,000 feet (1.83 kilometers) [source: Time]. Mt. Everest plays host to the Tenzing Hillary Marathon in May. The marathon features a 6,300-foot (1.92-kilometer) descent above the tree line. In Peru, marathoners have the chance to run the Inca Trail from Cuzco to the abandoned city of Machu Picchu and back. The good news is that it's technically a road marathon; the bad news is it's a several centuries-old cobblestone road that leads through three high passes. You can't complain too much, however. The famous pre-Columbian Inca runners used to cover 150 miles (241.4 kilometers) in a day, while the Inca Trail Marathon covers 27.5 miles (44.25 kilometers) [source: Cook].

While some marathons challenge runners with high elevation and steep inclines and declines, others are designed to use the elements to test runners' mettle. North Africa hosts two marathons that employ the hot, dry and dangerous Sahara Desert as the setting for their courses. The Marathon des Sables is a six-to seven-day series of marathons (some days more than 26.2 miles, or 42.16 kilometers) through the Sahara Desert in Morocco. Just next door, February brings the Sahara Marathon, a one-day event through the formidable desert in Algeria. Both of these races feature daytime temperatures of up to 120 degrees Fahrenheit (about 49 degrees Celsius) and no shade [source: SaharaMarathon.com].

On the other end of the spectrum (or thermometer) are marathons like the Siberian Ice Marathon, held each January in Omsk, Russia. This, the coldest marathon in the world, set a record in 2001 when the race was held in temperatures of minus 39 degrees Fahrenheit (minus 39 degrees Celsius) [source: Forbes]. Runners of the North Pole Marathon, held in April on the Arctic Ice Cap and the Antarctica Marathon, held in February on King George Island, often face temperatures of 10 to 30 degrees below zero Fahrenheit (23 to 34 degrees below zero Celsius) [source: Wellsphere].

Certainly, the purists may point out that a five-day, multi-stage trek through the Sahara or the 27.5-mile (44.25-kilometer) Inca trail isn't technically a marathon. Sounds like the purists should stick to the easier road courses.

Could Humans Break the Two-hour Marathon Barrier?
How Bay to Breakers Works
How the Bucks 5K Series Works