How the Seal Beach 10K Works

Browse the article How the Seal Beach 10K Works 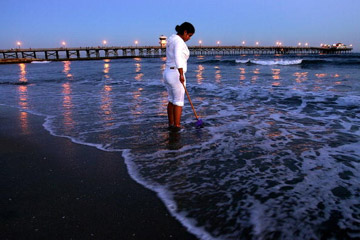 Sunset at Seal Beach, Calif., site of two of the more picturesque long-distance races in the U.S.
Carlo Allegri/Getty Images

On any given weekend, you can find thousands of different running events held in cities around the U.S., but very few of them offer the breathtaking beachfront views of the Seal Beach 5K/10K. If you're going to run 5 or 10 kilometers (3 or 6 miles), why not do it in one of the most beautiful places on the West Coast?

Every year since 1974, Seal Beach, a quiet seaside community along California's northern Orange County coastline, has hosted a running event on the first Saturday in April. From just a few hundred participants in its early years, the Seal Beach 5K/10K has grown steadily. Today, the race hosts about 5,000 runners and walkers [source: Seal Beach 5K/10K].

The 5K and 10K runs are mainly for adults, but kids can also get in on the action by participating in their own 1K fun run. Even dogs can gallop along with their owners -- as long as they stay on their leashes.

The Seal Beach 5K/10K is about more than just winning or even getting a good workout. It also supports a worthwhile cause. Actually, it supports several: All of the money raised during this volunteer-run event is used to provide grants to nonprofit sports, recreation and wellness programs in Seal Beach and its surrounding communities. In recent years, the Seal Beach 5K/10K has raised more than $100,000 to support roughly two dozen different organizations [source: Sun News].

In addition to paying an entry fee, walkers and runners can collect sponsorship donations from friends, family members and coworkers. All of the money raised through these sponsorships goes to the Cancer Support Foundation, a nonprofit organization that provides financial help and other support to cancer patients and their families living in and around Seal Beach.

The Seal Beach event has two different courses: a 10K and a 5K.

The starting line of the 10K race is located at the intersection of First Street and Marina Drive. Once the starting pistol sounds, waves of runners make their way down First Street. They turn left on Ocean Avenue and head toward Seal Beach Boulevard. Along the way, they cross the Pacific Coast Highway, which is considered to be one of America's most scenic roads.

From there, runners make a left on Westminster Boulevard en route to the San Gabriel River Bed. They turn left onto the River Bed Path and take the exit at Marina Bridge. Then they make a right to get back onto First Street and turn left to enter the final stretch along Ocean Avenue. (Ocean Avenue runs right along the Pacific, giving runners a fantastic seaside view.) Finally, racers sprint to the finish line, which is located at the pier.

The 5K race starts from the same location as the 10K, but its route forms a loop. Runners set off from the corner of First Street and Marina Drive and turn left on Ocean Avenue. They proceed down Ocean to Seal Beach Boulevard, but turn around just before reaching the Pacific Coast Highway and track back via Electric Avenue and Marina Drive to First Street. Then they make their final left turn back onto Ocean Avenue and cross the finish line at the pier. You can look at maps of both races here.

After the race, runners can refuel with water and snacks. Then they can cool down while browsing the wellness booths set up in the park surrounding the pier. 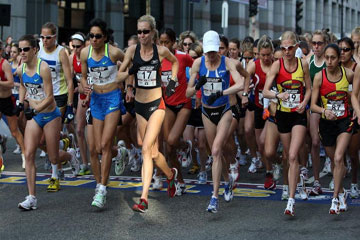 Due to the multitude of runners, it can take a couple of minutes to reach the starting line in most races, which can make it hard to determine the winners.
Elsa/Getty Images

Like other running competitions, the Seal Beach 5K/10K declares winners in each event. In recent years, the organizers have implemented a high-tech way to determine those winners. Instead of basing a runner's time on the starter's gun (it can take several seconds or even minutes for every participant to reach the starting line once the pistol fires), race officials use a computerized system to accurately record each runner's time.

Runners wear computer chips tied to their sneakers. When each runner steps on a special blanket at the starting line, the computer records his or her starting time. The computer timer also records an accurate time as each runner crosses the finish line. Thanks to this system, it doesn't matter when runners reach the start line -- their overall time will determine their fates.

The winner of each race (men's 5K, women's 5K, men's 10K and women's 10K) receives a trophy. First, second and third place winners in each of 13 different age and gender divisions get a medal. Every child who participates in the fun run goes home with a medal on a ribbon.

For more information on long-distance running, jog over to the next page.