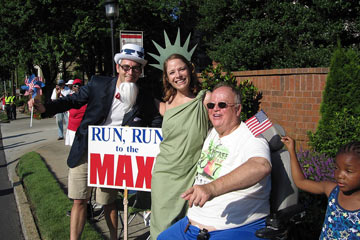 Among the spectators: "Uncle Sam," "Lady Liberty," and former Georgia Sen. Max Cleland, wearing one of the coveted T-shirts, from a past race.
Christy Cullen/flickr

Back in the 1980s, the chic souvenir to bring back for someone you really didn't want to spend a ton of money on was a T-shirt that said, "My grandparents went to Hawaii and all I got was this lousy T-shirt." But if it read, "I ran the Peachtree Road Race and all I got was this shirt," people would drool. Why? The Peachtree Road Race T-shirts are a big deal. How big? Each year the "Atlanta Journal-Constitution" holds a T-shirt design contest in which the winner is awarded $1,000. But the money doesn't mean as much as seeing your design all over town.

Perhaps the reason T-shirts from the Peachtree Road Race are so popular is that only those who finish the race get one. Upon completion, T-shirts are handed out as long as the runner still has his or her number. In the race's early days, even those who finished weren't guaranteed a shirt because organizers often didn't have enough to give out. That only added to the shirt's lore. Whatever the case, these T-shirts are worn out and about with an almost ostentatious pride. They are a hot commodity.

T-shirts aren't the only things handed out after the race. Winners of the race's various divisions earn a decent paycheck too. The top prize for the men's and women's open is $15,000, while the top man competing for the USA Men's 10K Championship earns $10,000. The total purse for 2010 was $111,300 [source: Running USA].

With so many people, finishes can get exiting. The 2010 race went down as one of the closest finishes ever when Gebre Gebremariam beat Peter Kirui by a half a step with both runners timed at 27 minutes, 56 seconds [source: Atlanta Journal-Constitution]. Joseph Kimani's time of 27:04 in 1996 is the race record as of 2010, while Lornah Kiplagat turned in the fastest women's time of 30:32 in 2002. Olympic champion Mary Decker won the race in 1978.

It isn't uncommon to see celebrities take part in the race either. Former Atlanta Mayor Shirley Franklin as well as consumer advocate Clark Howard are just a couple of the high profile names to complete the race. And in 1996 when Atlanta hosted the Olympics, 32 Olympians ran the race.