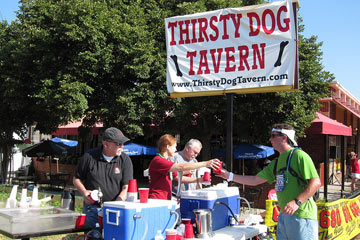 The Peachtree Road Race is an all-out festival when you take into account the number of people and organizational effort required to put it on each year.

Securing a number can be tough. Roughly 70,000 people apply for those 55,000 numbers. Since 2008, the first 45,000 have been awarded through registration either online (beginning March 21) or by filling out a paper application found in the March 28 edition of the "Atlanta Journal-Constitution." The other 10,000 are selected through a random lottery-type drawing. Typically the online registration is filled within hours of going live. For those who are chosen, a $33 entry fee (a far cry from the $2 fee for the inaugural race) gets you a number. It also garners you a coveted T-shirt, which we'll get into later.

With such a large race, there's a great logistical challenge with shutting down such a busy area of the city on a major holiday. So you'd better get there early if you're running or even watching the race. Because wheelchair racers start at 6:30 a.m. and the first runners head off at 7:30 a.m., the roads in the area around Peachtree Road and the route are shut down beginning at 5 a.m.

Before we take a look at the race route, check out some impressive facts and figures from a typical Peachtree Road Race.

As you can see, a lot goes into the Peachtree Road Race and planning ahead dictates who gets in and who misses out. And for those fortunate enough to get a chance to run, be careful what you wish for. In the next section we'll break down the race course. And as you're about to find out, it's somewhat of a rollercoaster ride. Especially Cardiac Hill.