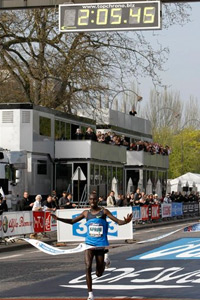 Vincent Kipruto of Kenya crosses the finish line to win the Paris marathon, Sunday, April 5, 2009 in Paris. Kipruto of Kenya beat the race record of 2:06.33 with a time of 2 hours, 5 minutes and 47 seconds.
AP Photo/Thibault Camus

The Paris Marathon course is mostly flat and is known for medium to fast finish times. Near the beginning of April each year, runners line up for an 8:45 a.m. start time. The handisports marathon begins with wheelchair participants hitting the road 10 minutes before the regular race starts. While the 2010 race had a 40,000-runner limit, previous years topped out at 37,000, with 28,883 finishing the race in 2008. This makes Paris the fifth largest marathon in the world in terms of finishers. That same year, 16.5 percent of the field was female and 29.2 percent were from countries other than France, with more than 90 countries represented.

As with all world-class marathons, the Paris event draws a field of elite runners to compete for the robust purse -- both the male and female champion receive a 50,000 euro ($63,000) prize. There's a catch to the winning the money, though, that differentiates the Paris race from other marathons. In order to claim your prize, you not only have to finish first, but also must meet a time requirement. The champion male runner must complete the race in under 2:11:45, and the top female needs a time under 2:23:15. A second place finish nets 30,000 euros ($38,000), third gets 20,000 ($25,000), and all of the top 10 finishers get a share, as long as they meet the time requirement.

The course records for the Paris Marathon were set in 2010 by the women, and 2009 for the men. An Ethiopian female named Atsede Baysa set the mark with a time of 2:24:42. A male runner from Kenya named Vincent Kipruto finished with an all-time best of 2:05:47.

If you want to try for a course record, or if you just want to run, check out the next page for lots more information about the Paris Marathon.