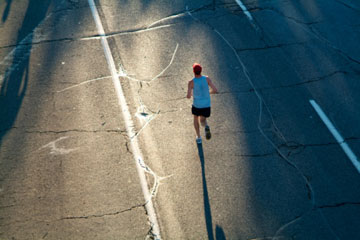 You can run alone and still participate in the Nike+ Human Race.
Hemera/Thinkstock

Imagine hundreds of thousands of runners, from every walk of life, every skill level, around the globe, running a 10K (6.2 miles) at the same time. In 2008, Nike hosted the Earth's largest one-day running event with its inaugural Nike+ Human Race. More than 750,000 runners participated in the event, which took place in more than 24 cities worldwide. What's unique about the Nike+ Human Race is that you don't have to be involved in an organized 10K to participate. You can run the Nike+ Human Race on your favorite course or even at home on your treadmill.

In 2008, runners collectively covered 802,242 miles (1,291,083 kilometers), and the Nike+ Human Race was aligned with charities like WWF, Livestrong and Ninemillion.org, with the goal of affecting global change and celebrating the sport of running. Technology also played a big part in the race. Via the Web site www.nikeplus.com, the Nike+ Human Race merged the physical running world with the virtual one. That meant anyone could participate, no matter where they were located around the world -- from small villages in South America to organized races in Los Angeles -- as long as they had access to the Internet.

The "brain" of the race is the Web site, which you use to help you track your pace, distance and even calories burned while you run. Here's how it's done: You place a sensor in your shoe, which sends info to an iPod, iPhone or a Nike+ sportband that you wear around your arm. After a run, you upload your stats to the Web site, where the information is analyzed. Via the site, you can set goals or join challenges. In fact, you might call the Nike+ community the world's largest running club. Users download running routes, upload their own favorite routes, participate in social networking and share information about upcoming events and races.

Hundreds of individual events take place on Nike+ Human Race day, but because of the Internet, the experience is shared worldwide. What is race day like in the different locales? And how can you participate? Learn more on the next few pages.

There's no set Nike+ Human Race running route. Because every runner tracks his or her own statistics on the Nike+ Human Race Web site, it doesn't matter where you run, as long as you run 10K. That means you can even run the race at home on your treadmill, if you want.

But if you don't want to run alone, you can join one of the many events held in various cities around the world. Race locations have included cities like New York, London, Buenos Aires, Seoul and Tokyo. Organizers chose specific sites to maximize the number of runners able to participate in each city. Nike partners also hosted races in their local communities. Let's take a look at some of the previous Nike+ Human Race routes around the world.

Other smaller races were also held, usually sponsored by a retail Nike store or a Nike partner. In addition, hundreds of other runners simply competed on their own routes, alone or with their running partners. At the end of each "race," participants uploaded their stats to the Web site, which tallied the results for each city, country and the world.

So, what were the results? Read on to find out.

Running 'Round the World

Who "won" the Nike+ Human race? In the countries categories, the United States runner with the Nike+ username "Bibi017" was the overall No. 1 finisher. His time was 33 minutes, 59 seconds. The No. 1 female finisher was the Japanese runner with username "tychan," with a time of 34 minutes, 40 seconds. Other top finishers came from countries like Canada, Chile and Switzerland.

But what about the rest of the runners -- the non-elite runners? How did they train? Nike harnessed its Web site to organize training runs around the world. Additionally, using the Web site, aspiring and experienced runners alike can put together their own training programs. Designed by Nike coaches, training programs are available for beginning runners up to advanced athletes.

Are you interested in running the next Nike+ Human Race? If so, dig into the running training articles on the next page.

That's a Lot of Cupcakes