Browse the article How the Morristown 5K Works 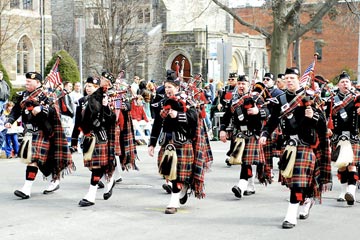 When you think of St. Patrick's Day, you probably don't imagine starting your morning with a 5-kilometer (3.1 mile) run. But for the residents of Morristown, N.J., that idea has become a tradition. According to current race director Heather Gardiner, the Morristown 5K was initially created in 2004 by local fitness outlet The Running Company to supplement the day's activities and has since grown into its own event. Like the rest of Morristown's official celebrations, the race falls on the Saturday closest to the actual holiday. But the fun doesn't stop when the race is run -- you can also enjoy the event's parade and pub crawl.

Although the holiday might seem like a strange occasion to run a race, organizers have seen increasing numbers every year [source: Compuscore]. While the majority of runners tend to stick with normal running gear, the race has seen costumes, green hair dye and other nods to the occasion, including a few leprechauns [source: Gardiner]. Of course, as you'd likely imagine, the official shirts and other paraphernalia follow the day's traditional green theme.

Registration opens up a couple of months before the race. You can pick up an early pass for $20, but if you wait until closer to the event's date, you'll pay $30. Each year, the proceeds go to a nonprofit or charity. In 2010, all earnings went to benefit the Morristown High School track and field teams and the Police Unity Bike Tour. The race doesn't leave kids out of the action -- for $10 children can sign up for a 1-mile (1.6-kilometer) fun run, which takes place right after the official race.

If running isn't your idea of a fun way to spend the morning, the race welcomes walkers as well, and the route is diverse and interesting enough to warrant a slower pace.

If you're interested in starting your St. Patrick's Day with a little exercise, you're probably wondering what the race-day atmosphere is like in Morristown. We'll take a close look at the route in the next section, as well as the average temperature and overall climate.

The Morristown 5K benefits from a suburban route through parks, large wooded areas and past a few homes. The race starts and ends at Ginty Field and circles around the Loantaka Brook Reservation, an area filled with dense forests and sports fields. While on the run, you'll be taking over the town's asphalt streets as the area is closed to traffic during the race. Near the beginning, you'll run over a few small inclines before hitting a difficult hill right after the first mile, but after that it's fairly level ground [source: Bost].

Being in New Jersey in the middle of March, chances are you will be fighting a bit of weather along the way. In recent years, racers have encountered severe winds, rain and other harsh conditions, making parts of the race even tougher [source: Weather Underground].

In 2010, nearly 1,200 people participated and almost 800 people finished the race, averaging between 25 and 30 minutes to complete it [source: Compuscore, Bost]. The weather didn't help participation in 2010 and, although the race was still run, the parade and other events were cancelled [source: Daily Record].

When the race starts, you'll find yourself in line with everyone else in Ginty Field. Like many races, an electronic system marks when you pass the start and finish line. While it might seem crowded at first, the two-lane road opens up as the race advances and runners divide into different paces. Along the route, you'll be treated to refreshments as well as the occasional onlooker, but, for the most part, the race is run for your own well-being.

Of course, it's not completely for your own benefit -- we'll take a look at how the results are tallied, as well as prizes and different winning categories in the next section. 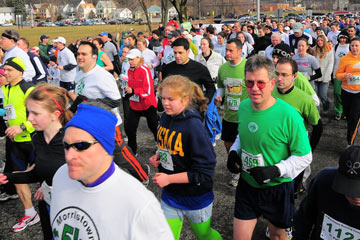 Like many races, the Morristown 5K uses a radio frequency identification (RFID) system to tally results and runners' times. These RFID tags track when you cross the start and finish lines, and they send a radio signal to a scoring system near these locations. In this case, it's a system called Chronotrack. Popular with many races, Chronotrack is a small tag that gets looped through your shoelaces or underneath your number [source: Chronotrack]. This system provides times that are more accurate than a watch, especially when dealing with a large amount of racers. It also enables the participants to compare their times with other racers, as well as their own previous results. This technology aids runners looking to track and gauge their improvements over time. That ability is especially handy for a race like this one, as the hill at the beginning of the race is known to slow down newcomers and old hands, alike.

As mentioned earlier, the Morristown 5K averages around 25 to 30 minutes to finish, but the best time in 2010 was nearly half that, 16:14.20. Of course, the best overall time isn't nearly the only one that matters. The Morristown 5K divides winning categories into 10-year segments, meaning there are both overall and age-related winning categories, as well as a masters division for participants over 40 years old. Finishing near the top of an age category can net you different prizes, including gift certificates, medals and brand-new running gear [source: Gardiner]. There aren't cash prizes, but with local businesses tossing in different types of awards, there's always something new and different each year.

After the race is finished, refreshments are available and prizes are awarded before the start of the St. Patrick's Day parade, which takes place just a few blocks away from Ginty Field.

If you'd like to know more about running or racing, you'll find lots more information on the next page.