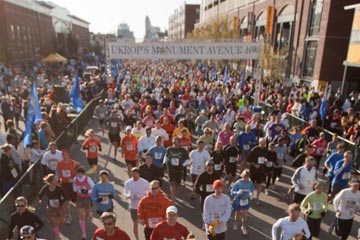 The Monument Avenue 10K's flat terrain gives you a serious shot at a personal-best time. There is a slight incline at the beginning of the course, but the cheering crowd will help push you through it.
Image courtesy Sports Backers

Every spring, thousands of people descend upon Richmond, Va., for the annual Ukrop's Monument Avenue 10K, presented by Martin's. Runners from around the world arrive with different goals -- some to win the race, some to run their personal-best time and some to vie for first place in the costume contest.

Monument Avenue 10K -- sponsored through 2013 in partnership by Ukrop's Homestyle Foods and Martin's Food Markets -- got its start in 2000 with a field of almost 2,500 runners. The original idea was to create a community event for local runners while encouraging those who thought they couldn't run a block -- much less 6.2 miles -- to join the fun. With Richmond's mild spring temperatures, a relatively flat course and the race's festive atmosphere (think costumes, roadside bands and hundreds of cheering spectators), the popularity of the Monument Avenue 10K has increased dramatically. It attracts people of all ages and abilities, from the elite athlete to the casual runner. In 2010, the number of participants topped 37,000. It was the 10th largest race in the United States and the 26th largest race in the world. [source: Miles & Minutes].

Sports Backers, the organizers behind the race, have kept the Monument Avenue 10K rooted in the Richmond community. They partner with local organizations to promote fitness and well-being. There are two official race charities. VCU Massey Cancer Center offers a fundraising program for individual runners and teams to raise money for cancer research. They also recruit volunteers to help organize materials and information for runners and to man water stations. Fit For Life fights childhood obesity and promotes healthy lifestyles for children and teens; they sponsor the First Market Mile Kids Run for ages 5 to 12.

Other important information about the Monument Avenue 10K:

Has your interest to run what USA Today named one of the top races in the United States been piqued? 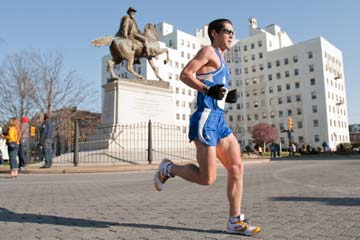 With Richmond's mild spring temperatures and the race's festive atmosphere, the popularity of the Monument Avenue 10K has increased year after year.
Image courtesy Sports Backers

If you've ever raced long distances, then you know the beauty of a course with few hills. A flat terrain gives you a serious shot at running your personal-best time. There is a slight incline at the beginning of the course, but with your adrenaline pumping and the cheers from the crowds, you probably won't give it a second thought.

With the exception of the start and finish, the race is run almost entirely on Monument Avenue. It begins at Broad Street, located in the Fan Historic District. After several blocks, the race makes a left turn onto Monument Avenue. Lined with trees and sporting a wide, grassy median, it is the only street in the United States to be designated a National Historic Landmark [source: City-Data]. You will see a total of six monuments during your run, mostly set in the middle of traffic circles; five of the six pay tribute to leaders of the Confederacy. The monument to Arthur Ashe, humanitarian and tennis star, was the last to be added.

Be sure to take a look at the mansions as you run along the avenue. They're no less stately than the monuments. Beginning in 1903, the street gave rise to beautiful homes, many inspired by the Beaux Arts style of architecture.

After 3 miles (4.8 kilometers), the course makes a U-turn. You'll head back down Monument Avenue for approximately 2 miles (3.2 kilometers). After running through the Virginia Commonwealth University campus, the race ends on Franklin Street at the entrance to Monroe Park -- Richmond's oldest, built in 1851 [source: Monroe Park]. Once you cross the finish line, you'll be greeted by a postrace festival with free food, beverages and music -- the perfect place to relax after a long run.

On top of a great course and a fabulous atmosphere, there are plenty of other highlights to the Monument Avenue 10K.

The Monument Avenue 10K is considered to be an out-and-back course (sharing the same start and finish line). There are aid stations with water and sports drinks at miles 2, 3, 4 and 5. Each station will also be staffed with medical personnel and have portable toilets.

The Monument Avenue 10K packs more into its race than a course steeped in history. The culture of the event embraces all athletes, from the sub-5-minute milers to those who meander at a slower pace. Cash prizes are awarded to the top seven male and top seven female runners. If you place among them, you'll receive your award at the finish line. There are also cash prizes for the top five runners in each age category. If you place in your age category, your award will be mailed to you.

The AT&T Dash for the Cash contest chooses one registered participant at random, gives them a head start and pits them against the entire Monument Avenue 10K field. If you're chosen as the "dasher" you'll be placed on the course at a predetermined spot based upon your running time. If you cross the finish line before anyone else, you'll receive $2,500. To help you win, you'll receive prerace advice from honorary coach, Bart Yasso, the promotion director for the Monument Avenue 10K, contributing writer for Runner's World magazine and veteran of more than 150 marathons.

If you're feeling creative and enjoy running 6.2 miles in costume then the Richmond-Times Dispatch Dress Up & Run Contest is tailor-made for you. There are two categories: individual/duo and group. Cash prizes are given to the top three participants in each category. Judges will be on the course taking notes on your costume's cleverness and originality. First place takes home $500. If you win, you'll be notified once you've crossed the finish line.

Kids aren't left on the sidelines on race day. The First Market Mile Kids Run, sponsored by Fit For Life Kids Challenge, begins before the 10K event. Kids ages 5 to 12 start in waves grouped by age. All participants receive a T-shirt, race number and a commerative medal.

The Monument Avenue 10K isn't just about the runners -- spectators get a crack at the action. Impromptu cheering sections and rock 'n' roll bands abound over the course of the race. For those who are more organizationally inclined, there is the Hirschler and Fleischer Spirit Contest. Each "Spirit Group," must have 10 or more people to participate. The more enthusiastic and original your group, the more likely it is you'll win the "Grand Spirit Award" cash prize of $300. Ten other cash prizes will be awarded to runner-up Spirit Groups. To qualify you must register with Sports Backers.

Road Races with a Tradition of Costumes

The Monument Avenue 10K attracts serious runners from around the world. While the prize money is not as large as races like the ING New York City Marathon or the Boston Marathon, placing as the 10th biggest road race in the United States is quite an accomplishment.

The runners who participate in the Richmond-Times Dispatch Dress Up & Run contest deserve to be mentioned here. The energy it takes to run a 10K dressed as a pirate with a paper boat strapped around your waist shouldn't be taken too lightly. In 2010, Leonard Tengco ran as "The Squirrel." His costume included holding a pole with a giant acorn attached to keep him motivated. He took home first prize in the individual/duo category. First place for the group category went to "Rub-A-Dub-Dub," led by Kenneth Mason and friends [source: Sports Backers].

Want to know more? Visit the links and sources on the next page for additional information on the Monument Avenue 10K, as well as information on related topics.