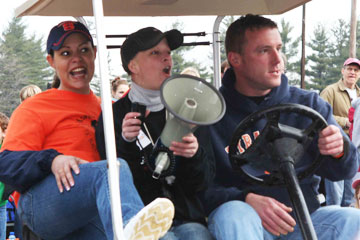 Each year, Meaghan's 5K, a charity race in the Rochester, N.Y., area, raises money for research into the early detection of lung cancer. Meaghan Latone grew up in a Rochester suburb. In 2006, at age 35, she entered a hospital suffering from severe discomfort in her back. Doctors soon found the source of the pain: bone cancer that had spread from her lungs. Her chances of recovery were slim.

During treatment, Latone found that there was a stigma attached to lung cancer. Because patients must have smoked, many people thought, they caused their own problem. In fact, Latone had never smoked. She was one of a growing number of patients, the majority of them women, who suffer from nonsmoker's lung cancer. Latone thought the stigma and the lack of research into the disease was unfair, and she was determined to speak out.

In November 2007, she published an essay in the local newspaper, "Do Not Give Lung Cancer Short Shrift." She noted that November is Lung Cancer Awareness Month, but that few people know it. Because of a lack of early detection, "about half the people diagnosed with lung cancer are in the advanced stages of the disease," she wrote. "Most of us in stages 3 and 4 will die within five years. This is unacceptable. I'm 36. I'm married with two young children. I have things to do" [source: Meaghan's Hope].

Latone's determination caught the attention of Gail Wagner, a former runner. She visited Latone and began to organize the first Meaghan's 5K in 2008. Working with Meaghan's family and a small cadre of volunteers, Wagner's effort was a resounding success, raising almost $60,000 the first year [source: Meaghan's Hope].

Insisting that all the money raised go to support lung cancer research, Latone and her family evaluated a number of proposals from the Wilmot Cancer Center, a leading research and care institution at the University of Rochester Medical Center. The program they chose to fund was one aimed at developing screening methods for lung cancer. It would not have existed without Latone's efforts and the financing from the race.

Read on to learn more about the important cause that Meaghan's 5K helps to support.

Meaghan's 5K: The Cause

Most lung cancer is associated with smoking cigarettes, but of those who develop the disease, 10 percent of men and 20 percent of women have never smoked [source: Simbra]. If nonsmoker's lung cancer were a separate disease, it would be among the nine most common fatal cancers in the U.S., killing as many as 24,000 people each year [source: Science Daily].

The causes of nonsmoker's lung cancer are not well understood. The disease may be related to air pollution or secondhand smoke. Radon, a natural radioactive gas that can collect in homes, could also be a factor. Some researchers point toward genetics or hormonal factors that may make women more susceptible [source: Lung Cancer Alliance].

Unfortunately, lung cancer often produces no symptoms until its late stages, when it has already spread to other organs. At that point, treatment is difficult and the patient's chances of recovery are low.

Lung cancer is as deadly now as it was 40 years ago. It's the leading cause of cancer death in U.S., killing one in three cancer patients. That makes it more fatal than the next four deadly cancers combined. To put it into perspective, lung cancer kills three times as many men as prostate cancer and twice as many women as breast cancer [source: Lung Cancer Alliance].

Yet many still assume that lung cancer patients contribute to their own illness. As a result, research on the disease has lagged. In 2009, the three major federal agencies that support medical research allocated $27,480 in research funding for each death from breast cancer. In contrast, they spent only $1,249 per lung cancer death [source: Lung Cancer Alliance].

Research on cures for cancer has been moving ahead in recent years, with better surgical methods and targeted genetic therapies known as smart drugs. In the case of lung cancer, what's lacking is a method of screening that can detect the disease at an early stage. This is the cause that Meaghan's 5K raises money to address.

In April 2008, Meaghan Latone attended the first race named for her. Her story and her dedication inspired hundreds to participate and to give generously to the cause. But for Latone herself, it was too late. She died on Aug. 16, 2008.

The location of Meaghan's 5K has changed twice before coming to its current site. Read on to find out details about the route.

Approximately 103,000 women and 116,000 men are diagnosed with lung cancer in the U.S. each year. In 84 percent of these patients, the disease has spread to other parts of their body before they find out about it. Only about 16 percent of patients live more than five years after being diagnosed [source: National Lung Cancer Partnership].

Gail Wagner organized the first Meaghan's 5K near her home in Webster, N.Y., a Rochester suburb. The race began and ended at a church parking lot in town. The runners proceeded along the flat, straight roads of the town, which lies on the shore of Lake Ontario. With Meaghan Latone's story fresh in the minds of area residents, the turnout was greater than expected. The location proved too small to accommodate the influx of more than 800 runners and walkers.

As a result, the organizers moved the 2009 race to Victor, another suburb of Rochester. The large public school campus was ideal, but the route that year had more hills, twists and turns. Another larger-than-expected turnout prompted yet another move.

The 2010 run was hosted in Greece, N.Y., a few miles west of Rochester. Participants began and ended at Lakeshore Community Church. The course is a perfect rectangle, "just four left turns," Wagner points out [source: Wagner]. The path is entirely flat and proceeds along residential streets. Local police block off the traffic lanes used by runners. The U.S. Track and Field Association, the main organizing body for the sport, sanctions Meaghan's 5K. USTFA officials measure and certify the distance.

The 2011 Meaghan's 5K is scheduled for April 30 on this same course in Greece. Runners look forward to the race because the long straight sections and flat terrain offer an opportunity for personal best runs or for a benchmark against which to measure the season's progress.

The race is open to both runners and walkers. It attracts serious runners, recreational joggers and those who just want to cover the distance. Many participants have been touched by cancer in some way. It's mainly a race for participants rather than spectators.

The event is family-oriented, attracting many young people. A playground is available at the church for children. Age-group winners get trophies; food is available afterwards. Participants in 2010 attended a post-race party featuring a band led by Meaghan's brother Sean.

On the next page, you'll read about the results of past Meaghan's 5K races. 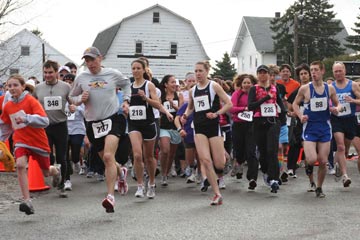 Meaghan's 5K is open to both runners and walkers. It attracts serious runners, recreational joggers and those who just want to cover the distance.
Image courtesy Dale J. Bizub/Courtesy Meaghan's 5K

When Gail Wagner got the idea for Meaghan's 5K, she was warned that there were already too many charity races and that she could end up losing money. She went ahead anyway. The first year, the 800 runners and walkers who showed up helped raise almost $60,000 [source: Wagner].

The next year, the early April race was plagued by horrendous weather, with strong winds and driving sleet. Still, 1,240 total participants attended and the event raised more than $60,000 for the cause. Scott Bagley, 45, from Pittsford, N.Y., won the men's division with a time of 18:53. Sarah Nazarian-Elliot, 37, of Fairport N.Y., was the women's winner, finishing at 19:12 [source: Meaghan's Hope]

In 2010, organizers moved the race to June in order to avoid a repeat of the bitter weather. The date put the event into competition with many more family and sports activities. The number of participants dropped to 661. Of those, 350 were runners, the rest walkers. Even with the lower turnout, the race raised about $35,000 000 [source: Wagner].

Wagner's 29-year-old son, Garrett, won the 2010 men's race in 16:10. The women's division went to Vanessa Taylor, 23, of Spencerport, N.Y., who ran 21:53 [source: Meaghan's Hope]. The times for Meaghan's 5K are calculated electronically by PCR Timing, enabling organizers to give accurate times to all runners.

The entry fee for the race is $20 in advance, $25 on race day and $15 for students. The fee covers T-shirts for the first 500 entrants. Most of the money raised comes from the contributors recruited by participants, as well as from corporate sponsors. Twenty-six members of Latone's extended family took part in the 2010 race, including her husband, Mike, and two children, Mia, 10, and Michael, 8. [source: Barry].

In her newspaper essay, Latone wrote, "My whole life is ahead of me." Her father Bill Barry has helped to organize and publicize the race. He sees the event as a tribute to his daughter's determination and hopefulness. The organization that has grown up around the race, called Meaghan's Hope, continues to refine its fundraising efforts and sponsor's other events, all for the sake of helping future victims of lung cancer.

Read on to find out more about running different 5K races.

How the Nike+ Human Race Works
How the Berlin Marathon Works
What are the toughest marathons in the world?