Browse the article How the Marine Corps Marathon Works 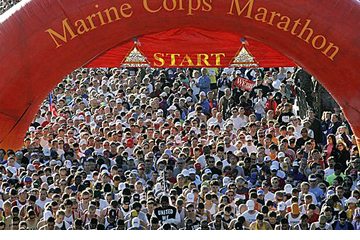 Completing a marathon means soldiering on in spite of thirst, hunger and physical pain. That's certainly true at the Marine Corps Marathon (MCM), a race that's held near the capitol of the United States as a celebration of teamwork and patriotism. The MCM is often called "The People's Race" because it's open to anyone and offers no prize money.

The annual event begins in Arlington, Va., and follows a course that winds past some of the United States' most revered memorials. Each year since 1976, hordes of runners and even bigger crowds have descended upon the capitol for this race, with even more expected in 2010, which is the 35th anniversary of the race.

The MCM was conceived by Col. Jim Fowler, who knew that after the Vietnam War, the military wasn't popular in the United States. On the other hand, recreational running was enjoying a huge resurgence. Fowler thought that a military-sponsored race would engage the public interest and, as a result, help boost the military's popularity, too. He passed along the concept to his superiors, who were immediately convinced that his idea had merit.

It didn't take long for the public to get excited about the race, either. The very first MCM featured nearly 2,000 participants [source: MarineMarathon.com]. Since then, the race has only gotten bigger. It's now the fourth-largest marathon in the country and the eighth-largest in the world [source: Sirdofsky].

Many consider the MCM to be one of the most family-oriented marathons in the world, in part due to its emphasis on good organization and sportsmanship. What's more, for a marathon of this size and prestige, there's a noticeable lack of professional runners. Amateurs -- rather than professional racers -- often win, lending even more of a laid-back feel to the event as a whole.

The marathon is also the largest event to earn a silver-level certification from the Council for Responsible Sport. The CRS gave this certification to the MCM after evaluating the race on five criteria, including Health Promotion, Community & Outreach, Materials & Equipment, Climate, and Waste [source: MarineMarathon.com].

In an effort to make the race more sustainable and environmentally friendly, the MCM took great effort to reduce trash generated at the race. In one year, organizers reduced the race's landfill waste by 32 percent [source: MarineMarathon.com]. Also, as part of other environmental initiatives, the MCM has a paperless application process. Finishers receive an electronic certificate instead of a paper one.

In addition to its reputation as environmentally friendly, the race is also welcoming to new runners. Out of the 30,000-plus runners, organizers said that, each year, one-third of them have never completed a marathon before [source: The Bay Net]. Keep reading to find out more about the MCM and how you can add your name to the long list of finishers. 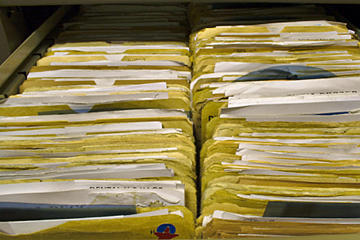 In an effort to reduce waste and become more sustainable, the Marine Corps Marathon uses a paperless application process.
Hemera/Thinkstock

Anyone over the age of 14 can run the MCM. Unlike the Boston Marathon, you don't have to qualify to enter. And in spite of the marathon's name, you don't need any sort of connection to the military to sign up, either.

Although you need strong legs to complete the 26.2-mile (42.2-kilometer) race, you need even quicker fingers just to register. The race is so popular that it often sells out quickly. The 2010 marathon filled in about six days -- with registration capped at 30,000. In fact, when registration opened on April 7, 2010, nearly 24,000 people signed up in the first 24 hours [source: Marine Corps Marathon].

That's not even the fastest sell-out time. The fastest ever registration happened in 2005, when the race filled in about 62 hours. In other words, if you want to be a part of the MCM, be ready to register as soon as possible.

If you missed the initial registration, you can still participate. You can register to run for the roughly 80 charities that are part of the MCM Charity Partner Program. Many people take advantage of this opportunity. Organizers expect about 2,000 runners to hit the course in support of a charity.

Those who don't register in time for the marathon, or who haven't trained for a distance this long, may want to run the MCM 10K race instead. The 10K runners start in the same location, but one mile (1.6 kilometers) into the route, they cross the Potomac River into Crystal City, where their route runs parallel to the marathon. Just like the marathon runners, the 10K runners finish at the Marine Corps War Memorial.

Like many marathons, the MCM's popularity carries beyond the area surrounding Washington, D.C. The 2010 race has entrants hailing from all 50 states. Runners from more than 40 countries make appearances, too.

Most runners simply run for themselves, but you can also enter a team and run the MCM as a group. If you enter as a team, you can have three to five teammates, however, only the top three finishers will have their times counted towards your team's overall performance.

Teams can be all male, all female, mixed, or runners from the Master's division (all 40 or older). Team members must all be a part of the same organization, such as the military, or a corporate team, club, government group or other entity.

In addition, there's a Challenge Cup competition at each MCM, in which the British Royal Navy and Marines send teams to take on the U.S Marine Corps team. The Challenge Cup has both a men's and women's division.

If you complete at least five MCMs, you can join the MCM Runners Club. Entry is free and guarantees your registration into the next year's marathon. This is an easy way to avoid missing out on a race that fills up fast. 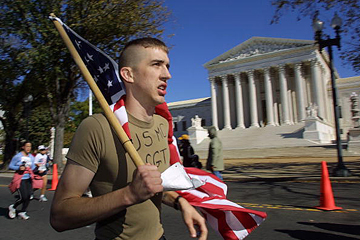 A participant in the Marine Corps Marathon passes the U.S. capitol on Oct. 28, 2001.
Manny Ceneta/Getty Images

Runners like to say that no race is ever the same. That's especially true of the MCM, where the route changes frequently, although the finish line is always set up at the Marine Corps Memorial in Virginia. The 2010 race route starts in Arlington, Va., and passes through Washington D.C.

Along the route, runners pass into Georgetown and then past the Kennedy Center. Then runners pass the Jefferson Memorial and then enter the National Mall. They'll run by the Korean and Vietnam War memorials, as well as the Lincoln and FDR memorials.

Runners pass the Gauntlet at the Washington Monument and then run past the U.S. Capitol. Then runners take Jefferson Drive to 14th Street and, at mile 20, arrive at the bridge that takes them back to Virginia. This stretch is called "Beat the Bridge," because runners must maintain at least a 14-minute per mile pace in order to reach this bridge before it's reopened to vehicular traffic. Runners who don't beat the reopening cannot receive an official finish time.

The course has minor elevation changes near the first third of the race, but for the most part the route is completely flat. After racers finish mile 8, the course flattens out with no noticeable hills for the remainder of the race.

If you're curious about the route and how to best train for the MCM, it's best to visit the race Web site. There, you can find an elevation map that shows exactly where you'll hit those intermittent early hills.

You can also view a map of the course layout and download a printer-friendly version so you and your family will have hard copy for race-day reference. If that's not enough, you can also print turn-by-turn directions that describe each portion of the race. More important is the list of street closings applicable the day of the race. This document advises marathon attendees and non-attendees alike as to areas they'll want to avoid and how best to manage transportation during this massive, traffic-snarling event.

Perhaps the most helpful feature on the marathon Web site is the bird's-eye 3-D video clip that shows you exactly where you'll run. You can follow the animated graphics and see mileage indicators overlaid on a satellite map, and you can pinpoint water and aid stations that will appear along the route, too. 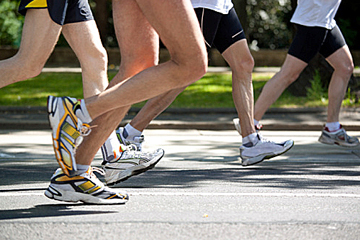 Runners in this marathon receive a disposable chip that automatically records their course progress and finishing time.
iStockphoto/Thinkstock

Each runner receives a chip that tracks his or her progress around the course and provides an official finish time, too. This goes for all participants, whether they enter as a runner, hand cyclist or wheelchair racer. In 2009, the overall winner of the race was John Mentzer, who finished in 2:21:47 [source: Hage]. The women's winner was Muliye Gurmu, with a time of 2:49:48. The wheelchair winner was David Swope, who completed the race in 1:53:03.

The MCM becomes even more legendary every year, in part due to some of its first participants. Four men have completed the MCM for every year the race has been held. They have a nickname -- the Ground Pounders. The youngest of the Ground Pounders is Will Brown, 63. The oldest is Mel Williams, 71 [source: Marine Corps Marathon]. None of the four wants to be the first to miss an MCM, so they all make a point of being in shape for the race each year.

Even if you don't see any celebrities during the race, you'll have plenty of company at the finish line. Race organizers say it's not uncommon for more than 100 racers to finish every 60 seconds. A member of the Marine Corps presents a medal to everyone who completes the race.

Finishers then participate in the MCM Finish Festival in Rosslyn, Va. They can use the Family Link Up area, where runners and family members can find each other by gathering near towers bearing the first letter of each runner's last name.

Whether you run the MCM this year or look forward to participating in a future event, you can be sure that you'll witness some of the best sportsmanship ever displayed at a marathon of this magnitude.

For more on this and other running events, dash over to the next page.