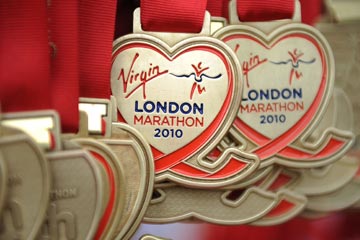 Runners medals wait to be handed out during the 2010 Virgin London Marathon.
Chistopher Lee/Getty Images

London! From Fleming and Chaucer to fish and chips, there are few places in the world more famous than England's capitol city. With such a storied history, it's no wonder that London is home to one of the world's top five marathons, too.

In a way, London is the mother of the modern marathon. Until 1921, a marathon's length was somewhat flexible, with most routes clocking in at around 25 miles. At the 1908 Olympic games, however, Queen Alexandra, wife of Edward VII, requested that the marathon be lengthened to 26.2 miles (42.16 kilometers) so that she could view the finish from her perch in Windsor Castle. It took a few years, but in 1921, the International Association of Athletics Federations (IAAF) adopted London's 1908 length as the official marathon distance.

The London Marathon is notable in many other ways, too. It's part of the World Marathon Major series, which includes Boston, New York, Chicago and Berlin. The top male and female runners in this series split the largest prize in all of marathon racing -- a million dollars. The London Marathon is also one of racing's largest fundraising events. To date, participants have raised over half a billion pounds ($807 billion) for charity. It's also making strides toward becoming a more sustainable race. Recycling and eco-friendly toilets are available along the course, and the 2009 event reported a 67 percent recycling rate.

A generous prize purse and fast, flat course attracts the world's most elite athletes year after year for a race that's always thrilling and quite often record-breaking. The route takes runners past some of London's most historic sites, including Tower Bridge and Big Ben. More than anything else, the London Marathon is a cracking good time, with many participants decked out in costume.

You'll need to be Johnny-on-the-spot if you want to gain a place in this footrace. Find out how to enter after the jump. 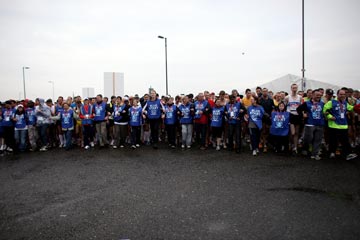 Competitors prepare for the start of the 2010 Virgin London Marathon.
Dan Kitwood/Getty Images

When it comes to entering the London marathon, your fingers, rather than your feet, determine whether or not you'll gain a place at the starting line. Out of 150,000 or so applicants, only about 50,000 will be awarded places in the ballot. To enter the race, marathon hopefuls submit an online ballot and a registration fee, which is only charged if they win a spot at the start. Once organizers receive 125,000 applications, they cut off registration. The ballot often closes in 24 hours or less, and winners are chosen randomly.

Runners who miss out on a ballot place can still try a few tricks to gain entry:

Once you've earned your spot in the ballot, it's off to the races. Read about all the twists and turns along the London Marathon route in the next section. 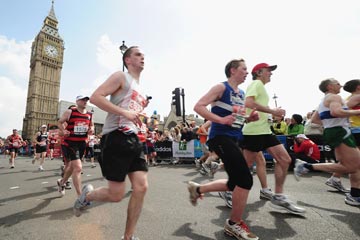 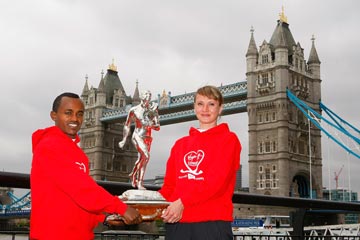