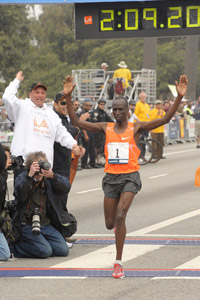 Wesley Korir duplicated his 2009 win with a victory at the LA Marathon on March 21, 2010.
John M. Heller/Getty Images

The median finish time of its participants (approximately five-and-a-half hours) places the Los Angeles Marathon among the slower marathons in the United States. But that is likely attributable to the number of novices who compete in the event, as the course is less challenging than other metropolitan marathons with faster median times [source: Running USA].

The LA Marathon offers a wheelchair division. The course record for men was set by Australia's Kurt Fearnley in 2007 with a time of 1:23:40 while America's Jean Driscoll established a course best of 1:46:09 in 1996. No one has earned more accolades at the LA Marathon than wheelchair racer Saul Mendoza of Mexico who has won the event seven times [source: LA Marathon].

The most famous marathon ever run in the city of Los Angeles was in the 1984 Summer Olympic Games. It marked the first time a women's marathon was part of the Olympics. American Joan Benoit Samuelson went on to claim the gold medal [source: Kangas].