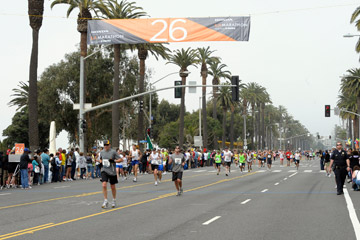 Runners at the 25th Los Angeles Marathon with less then 1K to the finish line in Santa Monica, California on March 21, 2010.
John M. Heller/Getty Images

In its 25 years of existence, the LA Marathon course has significantly altered five times and has had numerous minor adjustments. For the first decade of its existence, the marathon began and ended at Memorial Coliseum. In 1996 the race was moved to downtown Los Angeles, where it circled through city streets before ending at the Los Angeles Central Library. In 2007 the starting line was moved to Universal City, while the finish line remained the same as it had been for the previous decade. Finally, the much-heralded "Stadium to the Sea" route was introduced in 2010, and it proved successful.

The "Stadium to the Sea" route starts at Dodger Stadium before passing through some of Los Angeles' most famous communities and historic venues, beginning with Chinatown and its Twin Dragon Towers Gateway. Runners pass by Walt Disney Concert Hall and then traverse Sunset Boulevard, where they can get a look at the emblematic Hollywood sign. After exiting West Hollywood, marathoners are directed through Beverly Hills and run along Rodeo Drive. The westward trek then takes them into Century City and on to Route 66. The athletes continue their journey through Brentwood and get a view of the Pacific Ocean as they run the final three miles in Santa Monica. The finish line is situated on Ocean Avenue, not far from Santa Monica Pier [source: LA Marathon].

The current course configuration was aimed at providing its participants with a tour of sites that represent the Los Angeles area, inspire tired athletes with beautiful scenery and introduce the fewest hills possible -- thereby resulting in faster times. Understanding that many of the world's elite marathoners are from East African nations, some suggested that it would have made sense to take the course through the community of Little Ethiopia. Race organizers say that was a consideration, but Little Ethiopia would have added an additional incline to the otherwise fast route [source: Shelburne].