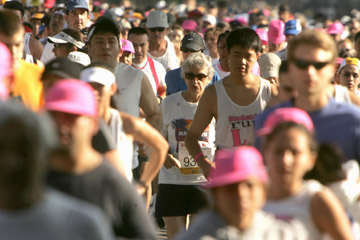 You don't have to be fast to race in the LA Marathon, just disciplined and determined.
Stephen Dunn/Getty Images

The LA Marathon is a popular choice for runners seeking to cover the 26.2-mile distance for the first time. Unlike the prestigious Boston Marathon, which requires proof that each prospective registrant has achieved a qualifying race time, the LA Marathon has no such standard. In fact, the majority of entrants in each year's race tend to be novices [source: LA Marathon]. Runners are given a generous eight hours to complete the event in order to receive an official finish time -- two hours more than many other metropolitan marathons. Marathoners are encouraged to register well in advance of the late March race date. In 2010 the LA Marathon sold out and 22,403 people finished the event -- a race record. It was the second straight year that more than 22,000 completed the course.

While no qualifying time is required to participate, veteran runners can earn preferred placement in corrals near the starting line based on previous marathon performance. Corral A is for people who can prove they've run a sub-three hour marathon in the past year. Corral B is designated for sub-four hour marathoners. Corral C is reserved for runners who've clocked a sub-five hour marathon in the past 12 months. Registrants have to provide LA Marathon officials with the name of the race that qualifies them for corral placement, the date of that race and their finish time for the event. Requests for corral placement have to be received no later than Jan. 1.

The LA Marathon uses a chip timing system, so regardless of whether you are positioned near the front of the pack or at the rear, your personal race clock does not begin to tick until you cross the starting line. A microchip on the back of each person's race number triggers a complex timing mechanism when he or she steps onto a high-tech rubber mat at the start. Other mats are placed at 5-kilometer intervals so athletes can later analyze their race in detail.