Browse the article How the Ipswich 5K Works 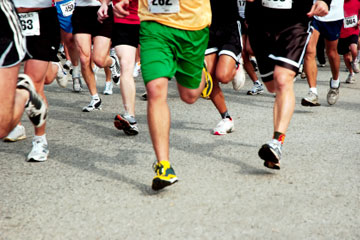 ©iStockphoto.com/byronwmoore
Runners who take part in the Ipswich 5K chase down Argy the gorilla.

In any competitive footrace, the goal is to chase, and hopefully overtake, the leader. In one Massachusetts 5K, however, that leader is wearing a gorilla suit.

Each year, at 9 a.m. on a Saturday morning in April, 300 to 400 runners gather at the YMCA building for the Ipswich Family YMCA "Chase the Gorilla Down Argilla" 5K. At first, it seems like any other race. But when the athletes cross the starting line, they aren't chasing fame, glory or a hefty grand prize; they're chasing "Argy," a local police officer in a gorilla suit whose identity is carefully guarded.

The Ipswich "Chase the Gorilla Down Argilla" 5K hasn't been around for long; the first race was run in 2006. But the 5K has quickly become an important event in the community. Local YMCA administrators came up with the idea for the race and decided that "gorilla" rhymed well with "Argilla" (pronounced "ar-JILL-uh"), a prominent road in the town. The event has become the most popular of several quirky races held in the area, including the "Beat Beethoven 5K," where runners try to finish before the end of Beethoven's 31-minute 5th Symphony, and the Rowley Poker 5K, where runners receive playing cards during the race and compete for the best hand at the finish line.

While all these events provide fun for participants and their families, they also serve as fundraisers for the Ipswich Family YMCA, a branch of the YMCA of the North Shore. According to its Web site, the organization is "committed to the values of caring, honesty, respect and responsibility" and "provides all children, adults and families, regardless of income, with opportunities to develop a healthy spirit, mind and body." So if you like good times and good causes, read on to learn more about the Ipswich "Chase the Gorilla Down Argilla" 5K.

Although runners may not focus too much on their surroundings as they run, the route for the Ipswich "Chase the Gorilla Down Argilla" 5K offers a charming tour of the community's quaint, small-town atmosphere. Founded in 1633 by a group of settlers from a city of the same name in England, Ipswich is located in northeast Massachusetts, just 5 miles (8 kilometers) from the Atlantic Ocean. While it lies just 30 miles (48.2 kilometers) north of Boston, Ipswich has a modest population of 13,000 and has retained its rural character despite the decline of agriculture in the area. The 5K route, which winds down highways and side roads south of the Ipswich River, tours some of the quiet residential areas and farmland that characterize the community.

Participants originally ran the 5K on a point-to-point route, but the popularity of the race soon forced race organizers to consider a loop route. Shuttling 300 to 400 runners back to the start proved to be too much of a logistical hassle, so in 2008 organizers adopted a new route where runners started and finished in the same spot.

The current route begins at the YMCA facility, where runners turn south down County Road for a brief period before veering left onto Essex Road. They then turn north onto Heartbreak Road, which skirts the charming farms of the Ipswich countryside. This road ends at Argilla Road, the route for which the race is named, where runners turn left. After traveling northwest on Argilla for a short distance, racers make a series of turns through town before returning to the YMCA building. In total, the 3.1-mile route has 13 turns -- eight left and five right. Despite the number of turns, the course is relatively flat, making it what runners might consider a "fast" 5K.

So how well do participants fare against the notorious "Argy"? Continue to the next section to find out.

Considering the men's world record 5K time is 13:00 and the women's is 14:46, the times turned in at the Ipswich YMCA 5K are not particularly competitive on an international level [source: Cruz]. A vast majority of the participants are simply weekend warriors from Ipswich and the surrounding communities who enjoy the competition and want to show support for their local YMCA. The following table shows the male and female winners since the race began in 2006, their times and their hometowns:

Competitors are also awarded points for the North Shore YMCA Road Race Series. The series began in 2006, the same year the Ipswich 5K began, and became a favorite circuit for local runners. Consisting of 14 well-organized, professionally-timed races, the series is put on by the YMCA in partnership with the New England Running Company. The more races you run, the more points you can get, but finish just five races and you're considered a "series finisher."

How has Argy fared over the last five years? Well, he has been caught a couple of times, but race organizers have taken steps to make sure he doesn't get beat again. Argy doesn't actually run the entire race, just the last 0.1 mile. The rest of the time he's riding around in a Corvette, Harley-Davidson sidecar, ATV, or other similarly-speedy form of transportation. Though the cards may be stacked in Argy's favor, it's all a part of the quirky fun at the Ipswich "Chase the Gorilla Down Argilla" 5K.