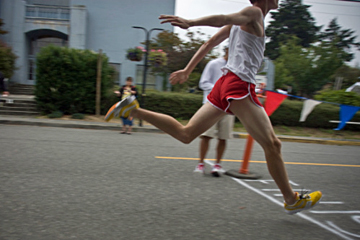 With 5,500 people running frantically during the 10K, race organizers use high-tech products to track each person's time. Runners attach a disposable transponder tag to their race bibs. Electronic pads at the finish line provide an exact finishing time for every runner, although the overall men's and women's winners are timed the old-fashioned way, with a stopwatch and visual confirmation of them crossing the finish line. Because the 5K is a non-competitive event, participants aren't timed.

The 2010 10K featured some fast runners and some familiar faces. In the men's division, Sean Wade, age 41, was the overall winner, with a time of 31:27. Mary Davies, 27, won the women's division with a time of 35:32. Both winners are Houston residents, and this was the first win in this event for Davies.

If the Rodeo Run 10K sounds sounds like a fun event, you may want to consider hitting Houston for the next event. The most comprehensive site you'll find for the race is at the ConocoPhillips Rodeo Run Web site. You'll see all of the registration and logistical information you'll need to add your name to the long list of race supporters.

For more on 10K runs and other athletic events, jog your memory with the links below.