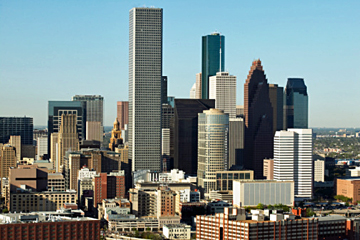 Runners who complete the 10K race will be treated to a scenic view of downtown Houston.
George Doyle/Stockbyte/Thinkstock

In essence, the ConocoPhillips Rodeo Run is a parade before the parade, with thousands of people donning their running shoes to take part. For the 2010 run, race organizers capped registration at 13,000 due to safety and congestion concerns. There were so many people excited about the race that race planners specifically asked that so-called bandits (unregistered runners) stay home.

The 10K and 5K runs start in downtown Houston at the corners of Texas Avenue and Smith Street. The competitive 10K starts first, with the non-competitive 5K fun run beginning a few minutes later. With the staggered start, there's reduced congestion and less likelihood that a casual 5K walker will be trampled by a faster 10K competitor.

The footraces blaze up the parade route for about three-quarters of a mile (about 1.2 kilometers). Then, after about a mile (1.6 kilometers), the 10K and 5K runs part ways, leaving the parade route and moving into different parts of downtown. Both runs and the parade all wind up at Minute Maid Park.

This is a special run for multiple reasons. For one, it's not a loop. It's the only large-scale, point-to-point run in Houston. Also, routes for both distances are planned carefully with runners' abilities in mind. The 5K route is completely flat.

The 10K route, however, does have a mile with significant elevation gain. These hills give runners a nice overlook to see the downtown skyline. Ultra-competitive runners looking to set records can do so here, because the 10K is sanctioned by USA Track & Field and the Gulf Association of USA Track & Field.

Overall, the race route is fairly tame, offering a flat, fast route that many experienced runners might use to set a personal record in the 10K event. Runners and walkers both receive an assist from the weather, too. In areas north of Texas, February would be a miserably cold time of year for a run. However, the average high temperature in Houston at that time is a mild 67 degrees Fahrenheit (19.4 degrees Celsius), and the average low is 48 degrees (8.9 degrees Celsius). That means cool conditions that make for comfortable, fun runs.

The end of the race doesn't mean the end of the fun. When runners arrive at Minute Maid Park, a gigantic post-race celebration starts. As the rodeo parade ends, parade participants and watchers descend on the party, too. Thousands of people mingle for hours after the primary events have ended.