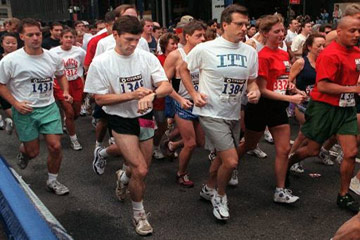 Runners take off at the JPMorgan Chase Corporate Challenge, named one of the greenest running events in North America by Runner's World magazine.
Doug Kanter/AP Images

The Whidbey Island Marathon in Washington prepares an organic prerace dinner, makes goody bags from 100 percent postconsumer recycled paper, composted more than half of its waste in 2008, makes its race medallions out of reclaimed glass and encourages participants to carpool using a ride-share Web site [sources: Bastone and Whidbey Island Marathon].

The Canmore Rocky Mountain Half-Marathon in Canada designated a "waste-free" starting and finish line area, where absolutely everything must be recycled. The race employs bicycle-powered support vehicles, provides locally sourced food and drinks, and donates all proceeds to green initiatives in West Africa and Central America [source: CAUSE Canada].

Portland refuses to be out-greened by its tree-hugging friends in the Pacific Northwest. The bicycles are out in full force on race day as support vehicles, and instead of handing out medallions at the finish line, exhausted racers can breathe in the rejuvenating oxygen produced by their very own tree seedling [source: Bastone].

The ING Hartford Marathon in Connecticut is working hard to be the green alternative to the neighboring Boston Marathon. In addition to the 2,000-gallon (7,571-liter) bubbler, Hartford racers also enjoy a post-race meal of local and organic foods [source: Bastone].

For lots more information about green initiatives and running events, jog over to the links below. 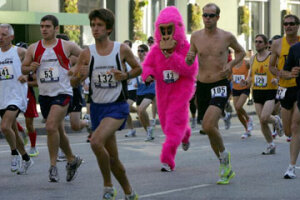 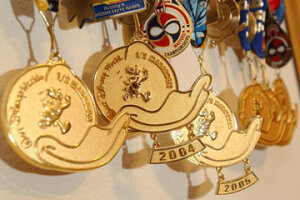