Browse the article How the Edison Festival of Light 5K Works 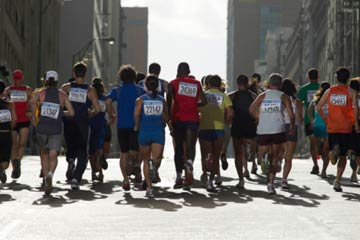 The annual Edison Festival of Light 5K in Florida has become a popular destination for runners.
Michael Blann/Allsport Concepts/Getty Images

When you think about Thomas Edison, the first thing that comes to mind probably isn't running. But the annual Edison Festival of Light, held in his honor in his holiday hometown of Fort Myers, Fla., holds a 5K race as a key part of the festivities.

In the mid-1880s, Edison, who was living in New Jersey at the time, built a winter home in Fort Myers after visiting there [source: Edison Festival]. The famed inventor lived and worked there during the cold months until his death in 1931. He was well-known in the community throughout his stay, and in 1938, his popularity led to the establishment of the Edison Pageant of Light, which included a ball, parade and concert in celebration of his life and work. But by 1988, the pageant was too big for volunteers to handle and became a nonprofit organization known as the Edison Festival of Light [source: Solomon].

Nowadays, the February festival boasts beautiful weather and features a number of activities, including a science and engineering fair, inventors fair, crafts, a float and a number of races -- the biggest being the Edison Festival of Light 5K, a 3.1-mile race around the city of Fort Myers. The race offers a slew of awards and is open to a wide range of age entrants. As of 2010, after 32 yearly races, the event has become a popular destination for runners from around the country. The race has seen its fair share of records: A World Masters and a Women's American running record have both been set on the course [source: Florida Running and Triathlon].

The registration price fluctuates depending on when you sign up. For most people, it varies between $20 and $35, with early registrants getting the discounted price and those who have special memberships getting a reduction as well. Because it's a nonprofit organization, the entry fees go toward the prizes as well as back into the festival itself. Entrants may register in person at the Edison Festival of Light offices or online.

If you're an out-of-towner interested in running the race, you're likely wondering what it will be like once you get down to Fort Myers. In the next section, we'll take a look at the route, atmosphere and terrain of the race.

With more than 1,300 people participating in the 2010 race, it's clearly a popular way to spend the Saturday afternoon of the festival [source: Fort Myers Track Club]. The race starts in downtown Fort Myers, just a few blocks away from the Edison Bridge in Centennial Park. The start of the race follows the Caloosahatchee River for several blocks before making a loop around Cleveland Avenue. After the loop, racers return to the downtown area and the finish line at the opposite end of Centennial Park.

If you think that sounds like a lot of running, you're right -- the race takes an average of 26 to 31 minutes to complete, with the fastest runner in 2010 clocking in at 14 minutes and 42 seconds [source: Fort Myers Track Club]. The race starts collectively at Centennial Park, with your start time being triggered when you pass the starting line. It might sound a bit chaotic, but the wide lanes and generous spacing allow adequate room for everyone, and the racers space out from one another over time.

Once you start running, you'll be treated to water stations and medical help, if needed, throughout the course. You'll also have about 200,000 spectators cheering you on from sidewalks and store windows as you make your way through the city [source: Florida Running and Triathlon].

As you run past the spectators, your feet will be treated to an asphalt surface -- which offers consistency and padding where other surfaces might not -- and an occasional stretch of concrete [source: Eyestone]. You'll also pass by hundreds of local businesses in a variety of districts before looping back around after reaching Lee Memorial Hospital. So, by the end of the race, you'll have seen a good chunk of the city.

Once you finish the race, you'll probably want to know how well you did. We'll take a look at how the results are tallied, as well as the prizes and rules, in the next section.

The race results are tracked by the ChronoTrack D-Tag system, a radio frequency identification (RFID) tag that slips into the laces on your shoes and sends a radio signal to a computer when you pass the start and finish lines. This method allows for racers to start at different locations behind the start line without affecting the end race time. You'll also get a race number, which helps ensure all participants are properly registered, to wear on your chest.

Racers are able to enter the 5K as individuals or as a team. If entered as a team, there are a few rules:

Entry as a team qualifies you not only for the team awards -- which consist of corporate, open, masters, and elementary, middle and high school -- but also for the individual categories.

Other awards are for individual race times. These include the top three males and females overall, male and female masters (ages 40 and up), grandmasters (ages 50 and up) and senior grandmasters (ages 60 and up). The categories offer a bit of leeway when it comes to awards, meaning if you're in your 60s but top someone in his or her 40s, you can still qualify for the masters category.

On top of the monetary awards, a collection of age-related awards exist as well. Starting from 9 and younger and going up in five-year blocks to 70 and older, these awards won't net you any prize money, but they will get you listed on the award pages and help you compare your time against racers of the same age and sex.

After finishing the race, participants can pick up refreshments at the finish line. Afterward, a party and awards ceremony are held in Centennial Park.

For more information about running and other races, continue on to the next page.