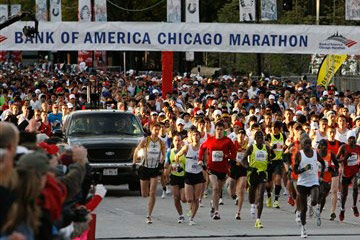 Runners take off from the starting point of the Chicago Marathon in Chicago, Sunday, Oct. 11, 2009.
AP Photo/Nam Y. Huh

Big brains, opposable thumbs and two legs helped humans come out of the trees and take off across the countryside. In fact, taking off is one of our best survival traits: Without our ability to chase down food, our species may have died out before it began. We humans exist because we jumped from the trees and hit the ground running.

With the advent of technology like automobiles, vending machines and computers for online pizza delivery, we no longer have the same need to run for survival. Instead of chasing food, we chase great jobs, wealth and being the best at whatever it is we choose to be. Unlike our forebears, we can live our lives without constantly competing for necessities. Now, we have the luxury of competing just so we can say, "I'm the best."

In the spirit of running toward our goals and being the best we can possibly be, some of us humans have embraced a grueling sport that harkens back to the days of yore: marathon races. Marathon runners have an endurance that even the most hunted of our ancestors would have admired. What's surprising is that almost anyone can run a marathon with the right physical training and mind-set.

Billed as a fast, flat course, many athletes run the Chicago Marathon in pursuit of personal bests. Serious amateur runners choose Chicago's course to achieve qualifying times for other races such as the Boston Marathon. Still others -- such as Steve Jones, Khalid Khannouchi, Catherine Ndereba and Paula Radcliffe -- have broken world records at the Chicago Marathon.

From its inception in 1977 to the present, the Chicago Marathon (affectionately shortened to "Chicago") has been known as one of the greatest marathons in the United States [source: Bank of America Corp, Race History].

Not only is the Chicago Marathon course fast and flat, but according to race event manager Jeremy Borling, it's also a lot of fun to run. Spectators cheer loudly from start to finish, and the course shows off Chicago's great ethnic and cultural diversity.

So, how did this great Chicago tradition get its start? Read on to find out why the marathon's participation exploded from 4,200 to more than 40,000 runners.

History of the Chicago Marathon

In 1977, Chicago mayor and avid runner Michael Bilandic set out to make Chicago the running capital of the world. The first Chicago Marathon, called the Mayor Daley Marathon after late mayor, Richard Daley, cost five dollars to enter. It attracted a field of more than 4,200 runners, making it the largest marathon in the world at the time [source: Borling]. In its second year, more than 5,000 people participated. The field was so large Chicago became the first course in U.S. racing history to set up dual starting points [source: Rinkunas]. Chicago still draws an astounding number of participants, and the race ranks among the top marathons in the world with a cap at 45,000 participants and more than 30,000 finishers most years.

Aside from striving for a personal best, why do so many runners participate in Chicago? Perhaps they're motivated by the big bucks that corporate sponsorship brings. Beatrice Foods became the Chicago Marathon's first corporate sponsor in 1979, but it wasn't until Bill Bright signed on as race director in 1982 and negotiated a $77,000 purse -- the total amount of prize money -- that the race began attracting international, world-class athletes. When Beatrice Foods ended its support of the marathon in 1987 and race directors couldn't find another sponsor, the marathon became a half-marathon instead. By 1988, the race had a new sponsor: Heileman Brewing. With the company's help, Chicago was able to offer a record-breaking $350,000 purse with $50,000 each to top male and female finishers. In 1993, LaSalle Bank took over sponsorship of the race, and it became the LaSalle Chicago Marathon. In 2008, Bank of America purchased LaSalle Bank and redubbed the race Bank of America Chicago Marathon. [source: Bank of America Corp, Race History].

How do you enter the Chicago Marathon for a chance to win prestige and prizes? Keep reading to learn what it takes.

Whether running for money, qualifying times or a personal challenge, marathon runners like to run in Chicago. Undoubtedly, the cool weather plays a part in this. Runners can warm up in cold conditions, but there's only so much they can do when the temperature rises. Cooler temperatures mean a lower core temperature, and that means runners are less likely to dehydrate. In fact, temperature has such an effect that a runner's time will slow 0.4 percent for every five-degree increase in temperature. People get faster times in Chicago in part because it's cooler [source: Allen; Kolata]. 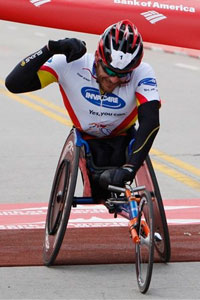 Two-time defending champion Kurt Fearnley, of Australia, crosses the finish line of the Chicago Marathon with a time of 1:29:09 on Sunday, Oct. 11, 2009.
AP Photo/Nam Y. Huh

The Chicago Marathon has a maximum time limit of 6.5 hours. In order to finish in time, you must be able to maintain a pace of nearly 15 minutes per mile. Some things to know:

One way to make your Chicago Marathon experience more meaningful is to run the race for charity. You have one hundred charity partners -- including the Red Cross and the American Cancer Society -- from which to choose. Sometimes charities can offer bib numbers even after registration is closed.

From runners dressed in costume to marriage proposals at the finish line, Chicago is one fast, fun-filled race. Learn more about the course itself in the next section. 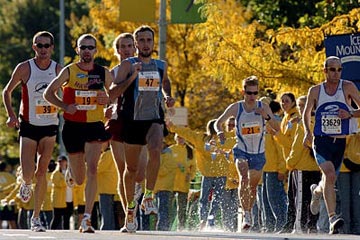 Runners grab water at an aid station during the 2004 Chicago Marathon as other participants run past.
AP Photo/Jeff Roberson

Chicago sports a route designed to highlight the city's diversity. Jeremy Borling with the Bank of America Chicago Marathon says, "The course runs from Downtown to Lincoln Park on the North Side of the city and continues to Old Town, Little Italy, Pilsen, Chinatown, Bronzeville and points in between. Each of the neighborhoods on the course truly embraces the event and adds its own unique footprint."

The race starts and finishes at Grant Park. Grant Park is in the part of Chicago known as "the Loop," so named because visitors can find a loop of public transportation on all sides of the park. Both the start and finish lines are easy walks to several major hotels; this comes in handy for runners when they're tired after the race. Furthermore, the Chicago Marathon, with its easy-to-use loop of public transit, is very fan-friendly. Motivated spectators can hop a train to view runners at various points along the course.

Twenty aid stations, located every one to two miles along the route, provide water and Gatorade, medical support, and bathroom facilities to runners. At mile 13, a nutrition station provides Accel Gel. Accel is a nutritional supplement in semi liquid form that offers a 4:1 carbohydrate to protein ratio. (Carbohydrates fuel performance and protein aids in recovery.) Aid stations 15-18 (miles 20-23.5) offer bananas -- a preferred food for runners because they are full of good carbohydrates, contain potassium (which runners lose through sweating) and because they're generally easy on the stomach.

One wild card in planning for the Chicago Marathon is Chicago's unpredictable weather. In October, Chicago temperatures can vary from 80 to 30 degrees Fahrenheit (26.6 to 1.1 degrees Celsius). The average high is 67 F (19.4 C), and the average low is 47 F (8.3 C). To better prepare runners for fickle weather, the Chicago Marathon features an event alert system. This is a color-coded method of communicating weather conditions to racers in the days leading up to and including race day.

Want to know more about the Chicago Marathon? Next, up, we share Chicago stories and talk about race results.

A Runner's Perspective on Chicago

Chicago is one of those courses that gives you a really upbeat start. For the first few miles of the race, thousands of cheering people line the streets. As marathon runner Kevin Allen puts it, "You can be in 2000th place, but you're a rock star." Plus, the technology of the marathon is great: Runners have a microchip tracking device on their shoes to keep their times, and the chips will also track their progress. Spectators can even sign up to get text messages detailing their favorite runner's location. This lets runners see their friends and family cheering them on, which is great for morale [source: Allen]. 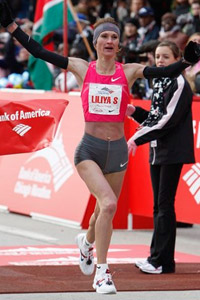 Find great links and lots more Chicago Marathon information on the next page.