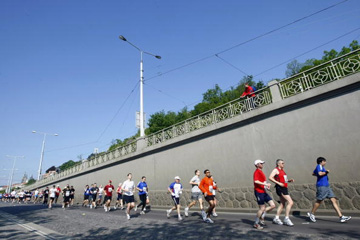 Spring means warmer weather and longer days, but in Bucks County, Penn., spring also means it's time for the Bucks 5K Series, a sequence of seven individual 3.1-mile (5-kilogram) races that take place from March through June. The series caters to runners, racers and rookies alike.

The Bucks 5K Series started out as the vision of Susan Pajer of Training Zone Sports, a local running and swimming specialty store. Bucks County has always had many spring races -- some even competing for runners on the same day. Pajer came up with the idea to combine several of the races into a single series; in 1996, the Bucks County Spring Challenge Series -- now known as the Panera Bread Bucks 5K Series -- got its start.

In spring 2010, the series celebrated its 15th year and attracted more than 4,350 5K runners and 1,400 fun runners, an 8 percent increase over the year before [source: Panera Bread Bucks 5K Series].

Each race includes a 5K as well as a fun run. Runners can participate in one race or all seven. Many running and fitness enthusiasts sign up for all seven runs to accumulate points and compete for a series award.

In addition to supporting worthwhile causes, the Bucks 5K Series helps many people to get in shape, set fitness goals and share in the camaraderie of running with others.

Read on to learn more about the Bucks 5K Series routes.

The Bucks 5K Series consists of seven individual 5-kilometer (3.1-mile) races. No matter what your fitness level or running experience is, all you have to do is set your goal and start moving. Whether you're hoping to be the overall series champion, set a personal record, run your first race or simply get out and join in the community fun, the Bucks 5K Series offers a little something for everyone.

Most courses feature a generally flat terrain with gentle elevation changes; detailed maps and elevation specifics for each 5K route can be found on the Bucks 5K Series Web site.

Take a look at the seven individual races, their starting points and the scheduled 2011 race day:

The Health and Wellness Center

Have you marked your calendar and started training? Read on to learn more about how series results are determined.

Some runners look to the Bucks 5K Series to jumpstart a fitness program, while more competitive runners set goals for new personal records and train to achieve them. Runners can participate in one race or all seven; as a cumulative series, the more races run, the greater the potential awards.

Finishes for the masters are determined by an age-graded ranking that compares the runner's individual performance with the average times in a worldwide database. In addition, every race has a one-mile fun run with awards for all finishers. Runners who register for all seven races receive a moisture-wicking long sleeve tech shirt with the Bucks 5K series logo.

All of the race results, complete series standings and information about the Panera Bread Bucks 5K Series may be found at www.bucks5kseries.com.

For more information on long-distance running, see the links on the next page.

What's the Fastest 5K Ever Run in the Bucks Series?