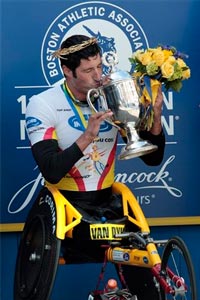 For the elite runners in the field, the Boston Marathon can be a lucrative day at the office. In 2010, the winners shared $806,000 in prize money. The first place finisher in the men's and the women's races each take home $150,000. The top 15 overall finishers each take home money, with the fifteenth place finisher winning $1,500. Racers in the Master's categories divvy up a $40,000 pot, with the male and female winners taking home $10,000 each. Push Rim Wheelchair competitors share a $60,000 pool, with the winners taking home $15,000. Set a world best or course record in your division, and you can earn a cash bonus. [source: Boston Athletic Association: Prize Money]

In the stamina category, two-time Olympian John A. Kelley "The Elder" has the distinction of being in the most Boston Marathons. He started 61 races and finished 58 of them. Two of his finishes were wins.

Even though the Boston Athletic Association organizes the race, it can only boast one champion throughout the marathon's 114-year history. B.A.A. Club Member John J. Kelley "The Younger" won the race in 1957, with a then-course record of 2:20:05.

For most runners, however, finishing the granddaddy of all marathons is victory enough.

Read on for lots more information about competing in marathons.