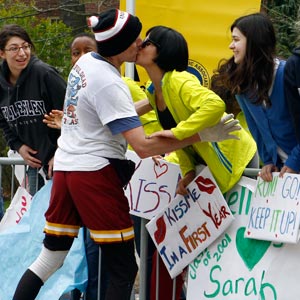 A Wellesley college girl gets a kiss from a runner as the race passes through Wellesley, Mass., during the 114th running of the Boston Marathon.
AP Photo/Mary Schwalm

The Boston Marathon course is a USA Track & Field certified course, meaning the 26.2-mile route is accurate. However, this race doesn't meet eligibility requirements for international record setting. Why? First, the course has a decrease in elevation over one meter per kilometer. Second, since the course is basically a straight line, the start and finish lines are too far apart to meet record-setting standards. [source: USA Track & Field]

The race officially gets underway at 9 AM, when the mobility-impaired runners take off, with the handcycle and push rim wheelchair divisions starting soon thereafter. The elite women start at 9:32. The main field has two waves of runners: The elite men and faster runners start at 10:00, and the second, slower wave of runners begins at 10:30.

The runners face a challenging course that starts in the western suburb of Hopkinton. The course winds its way eastward through the suburbs of Ashland, Framingham, Natick, Wellesley, Newton, Brighton and Brookline before reaching the city of Boston.

The Boston Marathon route has an overall downward trajectory, starting at an elevation of about 450 feet and sinking to nearly sea level at the finish. This marathon is known for its challenging hills, and that's evident right from the start. The first mile alone features a 130-foot drop, the steepest downhill on the course. More rolling hills kick in at mile eight. Although the halfway point of the race takes runners through Wellesley, they'll hear the college about a half-mile before they get there. That's due to the infamous Wellesley Scream Tunnel, where the women of Wellesley College line the route to cheer on tiring runners and dole out kisses for good luck.

Then it's on to Newton, and the last set of hills. The most famous of these is Heartbreak Hill, which comes between mile 20 and 21. While the climb up Heartbreak Hill isn't that steep, it is the last major hill on the course. It also comes at a psychologically difficult spot, where some runners begin worrying about hitting the wall and being unable to continue.

When marathon participants make it over this hump, it's literally downhill from there. Continuing east, they'll finally hit the Boston city limits with 1.7 miles to go. With one mile left, runners pass a Citgo sign, one of the most famous landmarks on the racecourse. The last mile is usually one of elation because runners know they have just a little longer before they cross the finish line at Copley Square.

Next up, we'll take a look at record-setting results for Boston Marathon finishers.

The Boston Marathon is known for its crowds of cheering spectators. Here are some of the best spots to watch the action: