Browse the article How Bay to Breakers Works 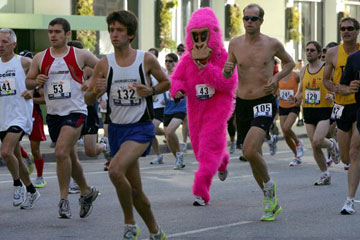 Don't be surprised if you see a pink gorilla trying to outpace the serious competitors at Bay to Breakers.
Ezra Shaw/Getty Images

It's a breezy May morning on Howard Street in San Francisco. The road is choked with tens of thousands of runners anxiously awaiting the start of one of the most legendary footraces in the world. As it begins, lean athletes from across the globe stride swiftly down the pavement, jockeying for positions in the crowd of competitors. Then something strange happens. As the trim racers in tank tops and shorts disappear down the road, costumed participants begin to appear. Spongebob Squarepants waddles down the street followed by a man dressed as a giant beer bottle. Some women are wearing bikinis; some people are wearing nothing at all. And instead of sports drinks, these revelers are guzzling alcohol. Sound crazy? Well it is. It's the Bay to Breakers.

A staple of San Francisco culture for nearly a century, the Bay to Breakers was initially created to lift the spirits of a city devastated by the 1906 earthquake. The first contest, held on Jan. 1, 1912, was dubbed the Cross-City Race. That year, 150 runners completed the 7.51-mile (12.1-kilometer) course through downtown, including Bobby Vlught, a St. Mary's College student and part-time newspaper copy-boy who won, with a time of 44 minutes, 10 seconds [source: Bay to Breakers].

The race enjoyed some popularity over the next few decades, but by 1963, registration dwindled to just 25 runners. In an effort to revamp the race, its name was changed to the Bay to Breakers in 1964 and the San Francisco Examiner assumed sponsorship in 1966. Participation in the event increased steadily through 1983 when officials changed the race distance to 7.46 miles, or exactly 12 kilometers. In 1986, 110,000 people took part in the Bay to Breakers, and the Guinness Book of World Records declared it the largest footrace in history [source: Bay to Breakers].

Today, the race attracts runners from all over the world, including course record holder Sammy Kitwara of Kenya, who finished the race in 2009 with a time of 33 minutes, 31 seconds. For San Franciscans, however, the Bay to Breakers isn't about speed. It's about having a good time and showcasing their home as one of the more exotic cities in the world. 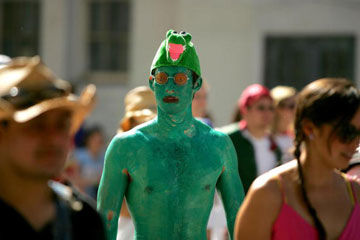 The Bay to Breakers gets its name from its starting point on San Francisco Bay and its ending point at the breakers along the shore of the Pacific Ocean. The route is a United States Track & Field (USAT&F)-certified, 12-kilometer (7.46-mile), point-to-point course, but because the start is so distant from the finish, it's considered "wind-dependent." This means that race times are not record-eligible unless no significant tailwind is detected. In 1994, however, the USAT&F allowed American runners to use their Bay to Breakers time to qualify for the Olympic trials for the Atlanta Games.

The current Bay to Breakers route runs east to west across the San Francisco Peninsula in the heart of downtown San Francisco. Beginning on Howard Street near the Embarcadero, participants move west to Ninth Street where they cut north to Hayes Street. The climb from here to Divisadero Street is the only significant hill along the route. After a brief turn south on Divisadero, runners turn west on Fell Street, which turns into John F. Kennedy Memorial Drive. This part of the route passes through Golden Gate Park before reaching the finish at the Great Highway at Orange Beach.

There are a number of pit stops along the route, though they aren't necessarily what you'd expect at a footrace. Like most such events, there are water stations where runners can cool down and rehydrate, and portable toilets where they can take care of business. One thing that's unusual about the Bay to Breakers is the number of these portable toilets you'll see along the route -- 705 in 2009 [source: Wildermuth]. This was in response to numerous complaints by local residents about public urination by drunken participants. What makes the Bay to Breakers truly unique, however, are the pit stop parties, where DJs and bands often provide a soundtrack for merrymaking at houses or random gatherings along the route.

Pit stops aren't the only things that make the Bay to Breakers a one-of-a-kind experience. Find out about other wacky traditions on the next page.

One hundred years of competition would create an institution out of any race, but the unique traditions of the Bay to Breakers make it one of the world's greatest events. After the serious competitors disappear down the avenue, the streets come alive with a carnival atmosphere that's not always what you'd call "family-friendly." It's a race that few American cities, aside from San Francisco, could pull off.

Perhaps the most popular tradition is the costumes. In 1940, a man dressed as Captain Kidd crossed the finish line last but became the first runner to don a costume. The trend became increasingly popular through 1992, when the first costume competition was held. Those wearing certain costumes have created traditions all their own, like the pack of Elvises who try to keep pace with the elite runners as the race first begins. While some participants wear more clothing as a part of their elaborate costumes, some prefer to wear less. Nudity, though not technically allowed, is usually overlooked during the Bay to Breakers.

Other traditions involve particular techniques for running the race. One such custom is "centipede" racing, first introduced to the Bay to Breakers by UC Davis track athlete Dwayne "Peanut" Harms in 1978. Centipedes consist of 13 runners who run the length of the race while connected to one another. Although this tradition may seem silly, don't be fooled: the competition is very serious. The Reebok Aggies set the men's course record in 1990 with a time of just 37 minutes, 39 seconds [source: Bay to Breakers]. Another, more light-hearted, race technique is practiced by participants dressed like salmon, who -- you guessed it -- run "upstream," or against the flow of the other runners.

But the wacky customs don't stop there. At the beginning of the race, runners toss tortillas into the air like Frisbees. Festive floats pulled by participants roll down the street (though these have recently been contained to a 1.2-mile, 1.9-kilometer, stretch east of the Conservatory of Flowers in Golden Gate Park). Despite efforts to curb or eliminate alcohol consumption from the race, beer, wine and mixed drinks flow freely in the streets. The day is capped by Footstock, a finish-line celebration with music, food and drinks for race participants. These are just a few of the traditions that make the Bay to Breakers a truly unique experience, even for San Francisco.

Ready to lace up your running shoes and head to San Francisco? The following section will tell you how to get started.

In 2010, networking Web site LinkedIn organized an effort at the Bay to Breakers to create the world's largest centipede. The resulting chain, which will be a world record if certified by Guinness, consisted of 2,375 participants [source: Bay to Breakers].

Whether you're a serious runner or someone who just wants to have a good time, a little planning will go a long way toward a successful Bay to Breakers experience. Many participants have found themselves late for the race, sick or stuck at the finish line with no ride home due to a lack of preparation. If you know what to expect, you're almost guaranteed to enjoy yourself.

The first thing you need to do is register. Registration can be completed online, and you can choose either to have the packet mailed to you or to pick it up at a predetermined San Francisco location. Deadlines vary depending on delivery method, so be sure to check the Web site at least a month ahead of time. The registration packet will contain your runner bib and timing chip.

Next, you need to plan how to get to the race. Organizers recommend taking public transportation from your hotel, though a limited amount of parking is available. If you do drive, keep in mind that the finish line is 12 kilometers from the start, so you need to decide how you'll get back to your car. Shuttles are available for a fee.

Once you make it to the race, you'll need to find your "starting corral." These are assigned based on the time a participant expects to finish a race. The longer you expect to take, the later your running corral will start. This policy is intended to ensure a less congested start, especially for the elite runners. You should meet with your starting corral no later than 45 minutes before the race begins.

When race time finally comes, make sure you aren't dressed too warmly. Even though the morning may be cool, you'll quickly begin shedding clothes as you begin moving. As any runner knows, you should also pace yourself; this goes for drinking, too. Twelve kilometers is a long way, especially when you've had a few. Finally, expect to see some nudity. If an occasional streaker bothers you, perhaps you should find another race in which to participate.

In recent years, race organizers have had difficulty persuading all the participants to register; in 2010 half of the 60,000 runners didn't pay the registration fee, including San Francisco Mayor Gavin Newsom [source: Matier]. With race costs in the millions of dollars, these non-paying "bandits," make it difficult for sponsors and race organizers to foot the event's bill.