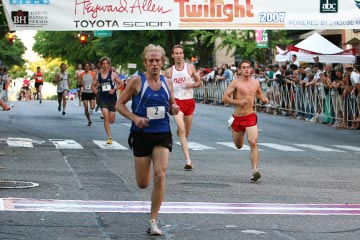 Is it possible for a sporting event in Athens, Ga., to be as popular as a University of Georgia football game? Well, maybe not. But the Athens Twilight Criterium comes in a close second to the Bulldogs. The annual cycling event is not only popular nationally among cyclists, but the race and related events bring in more than 30,000 spectators each year. And while the primary emphasis is on the cycling race, the Twilight 5K is hardly a neglected stepchild of the weekend. In fact, it's the race that rings in the weekend's events.

The Athens Twilight 5K first began in 1987, seven years after Gene Dixon founded the Twilight Criterium. It has become a popular feature of the Twilight weekend, kicking it off bright and early on a Saturday morning with the thud of 700 sets of sneakers hitting the pavement in downtown Athens. Rachel Cooke, a former track runner, works with Dixon on planning the 5K, which now has almost quadrupled the number of participants it welcomed in the late '80s.

Unlike the criterium, which is suited for serious cyclists, the 5K is open to participants of all athletic levels. The race's classes are divided up into 11 age groups, and individuals can choose to run, walk or a combine the two. Just be prepared: This race, unlike most 5Ks, will have you running (or striding) past throngs of spectators -- something that will make even a roadrace newbie feel like a champion marathoner. The top finishers of the race can go on to participate in another race, the "$1000 Mile." The less serious runners -- and the walkers -- are racing to benefit a local charity. In 2010, the participants raced to benefit the Joshua Reeves Foundation, an organization created in memory of a northeast Georgia man killed by an improvised explosive device, or IED, while serving as a U.S. Army corporal in Iraq.

So, whether you think you have the speed and stamina to beat out hundreds of other runners, just love running or want to help raise money for a meaningful cause, all you have to do is pay the $25 registration fee to enter.

If you plan to participate in an Athens Twilight 5K, which occurs each spring, find out more about the route and type of terrain you'll be facing on the next page.

Perhaps you've spent time on foot in downtown Athens before -- window-shopping and popping in local cafés. If you're participating in the Twilight 5K, you'll still be passing some of these same shops and restaurants, but this time at a much swifter pace. Rather than meandering down sidewalks, you'll be racing through city streets.

The race begins and ends on Washington Street in downtown Athens' historic district. The longest leg of the race is up Prince Avenue, but runners of the 5K will also circle through Nacoochee Avenue, Boulevard Street, Barber Street, Barrow Street, Pulaski Street, Hancock Avenue and North Jackson Street. The criterium, which also passes through Washington Street, has a much smaller course than the footrace.

When you begin the 5K, the terrain will be flat for the first 2 kilometers and when you close in on the finish. This leaves the more taxing part of the course, which contains a few rolling hills, in the middle of the race. Thus, the route provides for an easy start and a steady finish.

The 15 men and 15 women who master this route and win the 5K will go on to participate in the "$1000 Mile" race. This one-mile race takes place later that evening just before the cycling event on the criterium course, a few blocks south of the primary 5K route. The winners of this race win a $1,000 prize.

Whether you're racing or not, there are a lot of things to do during the Athens Twilight weekend that don't require tying up your sneakers and sweating it out on the street. Keep reading to learn about all that's involved with this special weekend.

If the Twilight 5K isn't enough to temper your need for adrenaline, consider participating in the Twiathlon. It combines the Saturday morning Twilight 5K with the Terrapin Wake 'N Bike ride at 10 a.m. The bike ride has a 50K- and 100K-route.

Whether you're an athlete, a spectator or someone who thinks pub-crawling is a sport, there's plenty for you to do during the action-packed Twilight weekend in Athens.

The main event, of course, is the Athens Twilight criterium, which occurs at night and recently celebrated its 30th anniversary. Other cycling events that weekend include the Terrapin Wake 'N Bike, a 50K- or 100K-ride that ends with a tour of the Terrapin Brewery in Athens and is often combined with the Twilight 5K run to create the Twiathlon; a hand cycling event that, when it first began, was the first hand cycling criterium in the country; and a BMX Jam, which includes a freestyle ramp competition.

There is also a bike race for kids ages 5 to 14, called the St. Mary's Twilight Kids Criterium. It is divided up into age categories. For children under age 5, there are Big Wheel and tricycle races. Another family-friendly feature is the Twilight Kids Zone, which offers face painting, music, rides, a moonwalk and more.

A decidedly less-athletic event hosted in connection with Twilight weekend is the Jazz Festival. The weekend concert series, which is co-run by the University of Georgia, features musical acts from the community and area schools. Another more casual activity is the Expo Area, where you can browse booths set up by Athens-area businesses. And speaking of Athens businesses, the Twilight Weekend will give you a great excuse to spend some time discovering -- or rediscovering -- the charming college town. Athens is filled with history, beautiful architecture, art galleries, unique shops, fine dining and quirky holes in the wall, so when you're not taking in a cycling event or participating in a run, stay downtown and explore all the city has to offer.

There's still much more to know about the Twilight Weekend and 5K. Keep reading to find out.

A criterium is a bicycle race of a specified number of laps on closed public streets. The events are gaining in popularity in the United States. Visit www.usacrits.com to view a calendar of upcoming criterium races across the country.

If you'd like to learn about events similar to the Twilight 5K and Criterium or know more about training for a 5K, we have lots more information on the next page.

From the 5K to the Marathon, American Runners Are Slowing Down
Kathrine Switzer's Trailblazing Boston Marathon Run Was 50 Years Ago
How the Chicago Marathon Works